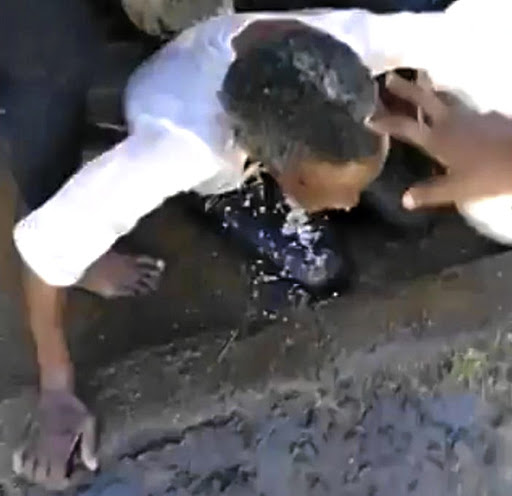 A screengrab of the video that surfaced on social media last week, showing how a KZN pensioner was abused by her relative. Social development department has now placed her in a place of safety, with MEC Weziwe Thusi calling for her abuser to be arrested.
Image: Koena_za via Twitter

The 63-year-old woman whose shocking abuse on video went viral on social media has been taken into the care of the KwaZulu-Natal social development department.

The woman from KZN was essentially water-boarded under a tap at a rural homestead. In the video, she can be seen being pushed, screamed at, and then shoved under a tap by a 31-year-old relative.

The incident took place in Sobantu outside Pietermaritzburg. It is unknown when the abuse took place.

The grandmother has now been removed from the care of her younger relative - a feat for which the social worker was praised for.

"I am proud of our ward social worker, who had to work with very little information to trace the gogo. He helped her open a criminal case and worked late into the night on Friday to ensure the older woman sleeps in a safe environment," social development MEC Weziwe Thusi said.

"Social workers investigated the incident of Friday and assisted the older woman to open a case of emotional abuse and assault. The grandmother was then removed and placed in a residential facility for older persons," the department said in a statement.

Thusi called for the speedy arrest of the relative. "This matter is now in the hands of the police," she said.

The shocking abuse of a 63-year-old gogo in KwaZulu-Natal - who was essentially waterboarded under a tap at a rural homestead - has resulted in calls ...
News
3 years ago
Next Article