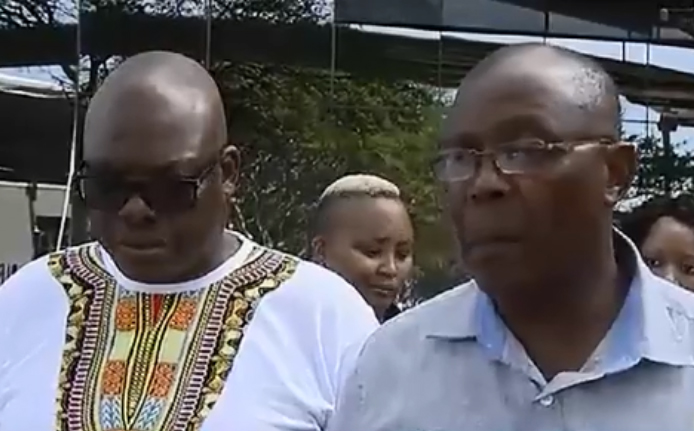 The father of music star Babes Wodumo real name Bongekile Simelane has accused her boyfriend Mandla Maphumulo known as Mampintsha of not only physically abusing his daughter but controlling her finances.

In an interview on eNCA, Reverend Welcome Simelane said Mampintsha has been controlling the ‘Wololo’ hit maker for his own financial gains.

“Mandla is using my daughter. I told him don’t use my daughter for your own gains. With all of these gigs including Black Panther (soundtrack), all that income, Mandla consumes all that money. It is more than a few million,” he said.

“Mandla is using my daughter in a very big way, someone must investigate him. Mandla is enriching himself with my daughter,” he said.

The Reverend said he has been aware of the abuse his daughter has been enduring as she has confided in him.

“She’s very close to me. She always tells me that daddy, Mandla is abusing me. Whenever Mandla sees any young boy around me or when I’m attending gigs around S.A he is going to fight and hit her in front of her dancers or subordinates,” he said.

He said that he has confronted Mampintsha about the abuse however the kwaito musician does not listen to reason.

“I told Mampintsha that I have never hit Babes' mother. But Mampintsha never wants to listen,” he said.

The father also told TshisaLIVE that Mampintsha manipulated his daughter by threatening to kill himself if she left him.

"I spoke to him on the previous assault and went to talk to his father so he stops the abuse. My daughter recorded the video because she saw that Mampintsha was going to kill her yesterday and whenever she tries to leave him, he threatens to kill himself."

The distressed father recounted Babes' Metro FM interview with Masechaba Ndlovu last May where she was confronted about the abuse and how things backfired on the radio personality.

Simelane told TshisaLIVE he was fuming after he saw the video.

"I'm sick and tired of him (Mampintsha) and I've reached a point where I want to take the law into my own hands ..."

Simelane has also alleged that the police in KwaZulu Natal are corrupt and are on Mampintsha’s payroll. - Additional reporting by Nonhlanhla Msibi and Karishma Thakurdin

The EFF has opened a case of assault against musician Mampintsha in Durban. The party's KZN chairperson, Vusi Khoza, says they've tried to reach out to singer Babes Wodumo.