10 years for killing his teacher 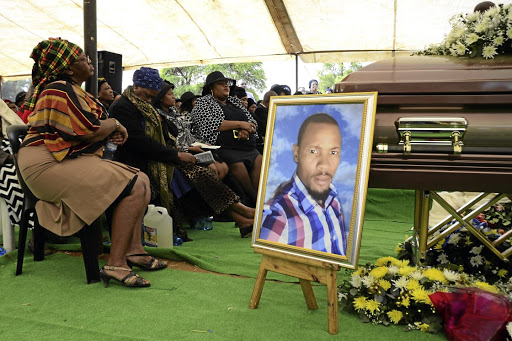 The teenager who killed his teacher Papiki Mokolobate, who was laid to rest in North West last year, has been sentenced to 10 years in prison.
Image: Tiro Ramatlhatse

A 17-year-old who stabbed a North West teacher to death at school has been sentenced to 10 years for the murder.

The teenager, who's turning 18 next month, was sentenced to imprisonment by the Lehurutshe magistrate's court yesterday.

He stabbed Gadimang Mokolobate, 24, a mathematics teacher at Ramotshere secondary in Dinokana in September last year after the teacher apparently wanted him to cut short his long hair.

The teacher had also ordered that the teenager not be served food ahead of other pupils after he had jumped to the front of the school's feeding scheme queue.

Mokolobate's family were visibly disappointed with the sentence announced by magistrate Winnie Malane.

"He killed our child, what is 10 years," the deceased dejected father Prettyboy Mokolobate fumed.

Before sentencing the teenager, Malane told the court that it was not easy for her to decide on a prison term for the teenager as punishment for his offence.

She mentioned that the Child Justice Act stated that prison must be a last resort for a minor and it must be avoided at all costs. Her conclusion was based on three factors, including that the teenager did not show remorse.

The teenager said he only felt sorry for his own family as he had put them in the spotlight. He also said he felt nothing for the family of the victim.

The family of Gadimang Mokolobate could not hide their anger during his funeral service at the weekend.
News
3 years ago

The second factor Malane considered was that there was the likelihood that the teenager was part of a gang.

"It turned out that you had fresh tattoos on your legs; you also said you were told that if you tattooed your legs you will be protected, but you did not say whether you were part of a gang or not," Malane said. The last factor was that the crime was planned and premeditated.

"Life has been lost. The victim was a teacher and a bread winner; he chose a career which was a calling but it ended his life. You trampled on his rights; his family will live without him for the rest of their lives," the magistrate said as she explained why she could not impose section 76 (2) of the Child Justice Act which states that the sentence must not be more than five years.

The teen's motives for the attack as detailed in a pre-sentencing report revealed that he had felt aggrieved that the teacher did not instruct other pupils to also cut short their hair.

Teenager fit to stand trial for murder of school teacher

The 17-year-old pupil accused of killing a teacher in North West is fit to stand trial.
News
3 years ago

He also said things got worse when he was on the "wrong queue" for school lunch. The orders made him angry to the extent that he went home to cool down. The following day the teenager came to school with a knife because he wanted to teach Mokolobate a lesson.

He approached Mokolobate from behind and stabbed him in the chest.

The magistrate said she could also not impose section 76 (3) of the act which states that a minor could be sentenced to a youth centre for a period until he reached 18. She said that would not have been appropriate as the murderer was turning 18 in a few months time.

"I believe I gave you sufficient reasons why I impose this sentence," she said. "You are therefore sentenced to 10 years."