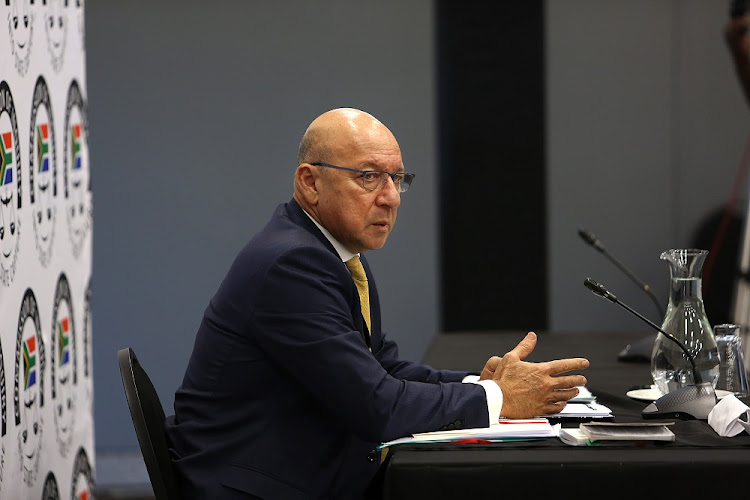 Former finance minister Trevor Manuel has described to the state capture inquiry an August 2011 meeting of the ANC’s national executive committee (NEC) in which Fikile Mbalula confessed that members of the Gupta family told him he would be appointed as a cabinet minister.

Testifying before the Zondo commission on Thursday‚ Manuel said Mbalula‚ who was promoted by then president Jacob Zuma to minister of sports and recreation in October 2010‚ wept when he told the ANC's top brass of his encounter with the Gupta family at their Saxonwold home before his appointment was announced.

"My recollection of that NEC was that there was a tense discussion about the influence of the Guptas. The ANC is a political movement and politics is very wide‚ with wide-ranging issues ..."

Manuel said among the issues that emerged during the meeting was why the Guptas were as influential as they were.

Trevor Manuel said state capture was an endeavour to remove the controls enshrined in the Public Finance Management Act.
News
3 years ago

"My recollection is that when it came to the opportunity for Mbalula to speak in that meeting‚ he became very emotional. In the exchange of open letters among ourselves‚ I refer to his weeping ... He said he was called to Saxonwold to be told by the Guptas (of his promotion).

"What Mbalula said was that when he was called to Saxonwold he went there and there he was told he was going to be appointed as minister of sports and recreation. He was first very excited about making it into cabinet‚ but in retrospect it should never have been the Guptas or anybody else who told him that. It was the prerogative of the president and that prerogative had been violated in the way the information was shared."

I’d like him (Ajay) to be here. I’d like him to give up the hiding place in Dubai and be here

Manuel said he did not recall any reaction from Jacob Zuma at the NEC meeting.

In his application to cross-examine Manuel‚ which was turned down‚ Ajay Gupta said it was him who met Mbalula‚ not his brother Atul‚ as Manuel said in his testimony. Ajay said he merely congratulated Mbalula on the appointment and had not told him of the position.

"I think the fact that there's an acknowledgement that ahead of Mbalula's appointment there was a discussion about the fact that he would assume a certain position ... how did he come by that knowledge is an important question..

"I’d like him (Ajay) to be here; I’d like him to give up the hiding place in Dubai and be here‚" Manuel said.

His testimony will be followed by that of former cabinet minister Siphiwe Nyanda.

Trevor Manuel said state capture was an endeavour to remove the controls enshrined in the Public Finance Management Act.
News
3 years ago

'The name is corruption‚ but the game is procurement': Eskom's chair

Eskom board chair Jabu Mabuza told the state capture inquiry on Friday that corruption at the power supplier manifested itself within the procurement ...
News
3 years ago

ANC MP Zukiswa Rantho has attacked former acting boss of Eskom Matshela Koko, calling him a loyal servant of the Guptas and a "possible criminal".
News
3 years ago

Former Glencore chief executive Clinton Ephron has described two meetings with Eskom in which the utility's then acting boss Brian Molefe shut down ...
Business
3 years ago

Eskom has laid criminal charges with the Hawks in relation to the power utility's coal supply agreement (CSA) with Gupta-owned Tegeta.
News
3 years ago