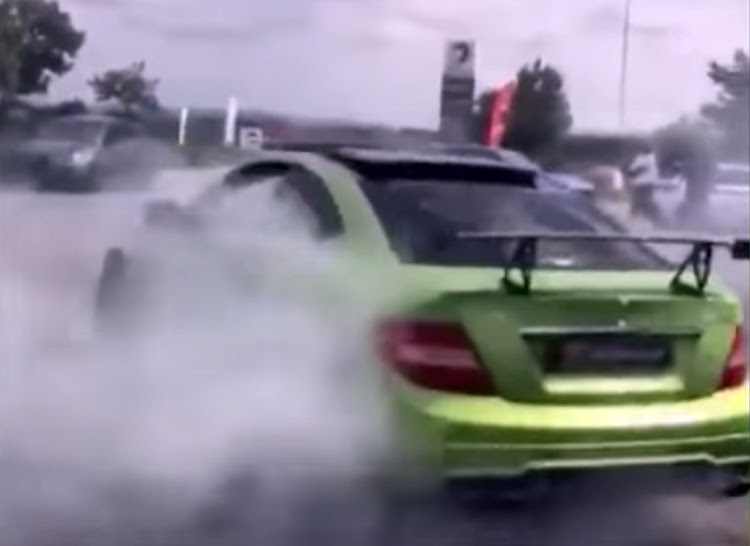 A Mercedes-Benz driver has been arrested after he crashed his car into a police van following an alleged drifting incident.
Image: Youtube

The driver of a Mercedes-Benz C-Class coupé - with a penchant for drifting - ran out of luck at the weekend when his car collided with a police van in Witbank‚ Mpumalanga.

He was promptly arrested.

The man appeared in the Witbank Magistrate's Court on Monday and was granted bail of R1‚000.

Police said officers were inside the van at the time of the accident. "They were injured but have since been discharged from hospital‚" an officer told SowetanLIVE.

A series of videos was shared on social media of the Mercedes drifting in various public places. One clip shows the green vehicle spinning in what appears to be a residential area. It comes to a halt just behind a minibus taxi. Another clip shows smoking tyres as the Mercedes spins in circles at a petrol station‚ leaving skid marks on the road.

A third clip was taken after the collision with the police van. The van is shown lying on its side as a crowd of bystanders rush forward. When the drifter's vehicle comes into the shot‚ its entire front looks damaged.

A police officer told SowetanLIVE that the arrested driver had offered to pay for the damage to the van.

An eyewitness said the police vehicle had been parked for only a few minutes when the collision happened. Officers had arrived at the scene and parked their vehicle on the side of the road‚ remaining inside the van.

"Part of the vehicle was on the pavement‚ while the other part was on the road. That's why it was so easy for the car to fall over‚" he said.