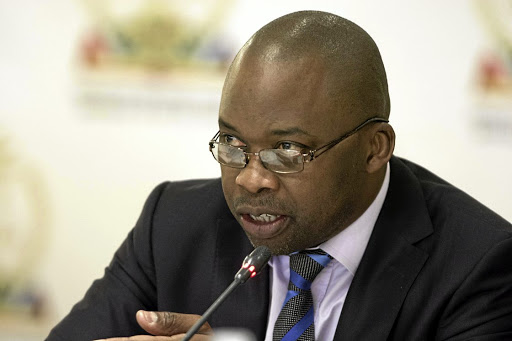 Justice and correctional services minister Michael Masutha has detailed how he spent a weekend in 2016 at a property belonging to controversial Bosasa CEO Gavin Watson.

Masutha made the startling revelations while responding to questions from DA MP Glynnis Breytenbach at a meeting of the portfolio committee on justice and correctional services. The meeting was called to discuss the department's plans to terminate contracts with Bosasa after the company entered into voluntary liquidation.

Breytenbach asked Masutha if he ever met Watson or any of brothers and other family members.

Masutha said he met Watson at the end of his this three-day stay at one of the controversial businessman's houses in Port Elizabeth where he was accommodated to attend the ANC's Siyaqoba rally of 2016.

Thabang Makwetla wants to clear his name before the state capture commission of inquiry.
News
2 years ago

Masutha said he had been offered accommodation by a fellow ANC MP who had heard of his struggles to find a place to stay at the "small PE".

Masutha said his parliamentary colleague told him an arrangement had been made. Masutha accepted the offer without asking at whose house he would be staying.

"I received a call from a colleague MP asking me if I was attending the rally and indicated yes‚ I had arrangements to attend the rally except there was a difficulty in my office securing accommodation.

"And he said no we're aware that comrades are struggling to find accommodation because PE is a small place for the size of event that's envisaged and we've been helping comrades by asking locals to make accommodation available."

Masutha said during the telephonic conversation with the unnamed MP‚ it was agreed that contact would be made with his office to finalise the arrangement.

"Indeed accommodation was confirmed‚ the colleague indicated that accommodation had been secured. I arrived on a Thursday evening and I stayed until the Sunday morning.

"On the Sunday morning I phoned the colleague to thank him for the accommodation and to ask him to thank whoever the owner of the house [was].

"He said no‚ actually the owners of the accommodation would be arriving at the house to meet me and then I can thank them."

Masutha told MPs that "gentlemen arrived" around 10am that morning.

"One of them introduced himself as Mr Gavin Watson and in the course of thanking them and asking them if there were any costs incurred they forward the invoice to the department so that the accommodation could be paid for.

"They said no‚ this was part of providing accommodation to delegates who came for the event."

Masutha said Watson then proceeded to ask him to intervene in a dispute between Bosasa and the correctional services department‚ which at the time was seeking to "disaggregate" the company's lucrative contract.

"I said to him that I don't deal with procurement or any contractual issues at the department. If indeed he felt that they had complaints he wished to raise with my office he should do so in writing‚ I don't deal with matters informally."

"It became apparent to me a few months later‚ because I wasn't even aware that there was a procurement process under way in the department‚ soon after the awarding of the contract where some of the management areas had been awarded to other service providers and the time Bosasa sought to challenge the legitimacy of awarding those management areas on the grounds that the companies that were awarded did not meet the criteria.

"At the time our agreement at the department was that indeed it was the right approach to take in principle for disaggregation in order to disbundle‚ if you like‚ this monopoly that had carried on in the department.

Masutha said that except for this one encounter‚ he has never met Watson or any of his family members.

Masutha's deputy‚ Thabang Makwetla‚ told the meeting that he had made a submission to the ethics committee which is probing him and other ministers after it emerged last year that Bosasa paid for and installed security upgrades at his private home.

Makwetla said he had already repaid Bosasa for the security upgrades.

The company, which is embroiled in allegations of state capture, has gone into voluntarily liquidation following the closing of its bank accounts
News
2 years ago

The state capture inquiry heard on Tuesday how one man provided controversial prison facilities company Bosasa with millions in cash that was ...
News
2 years ago

Masutha also announced the suspension of a senior official in order to rid his department of the rot it had in its dealings with Bosasa.
News
2 years ago

Whistleblower and former COO of Bosasa Angelo Agrizzi said he is holding onto his faith despite facing criminal charges.
News
2 years ago
Next Article