Bushiri's flock out of pocket after cash 'lost' in investment scheme 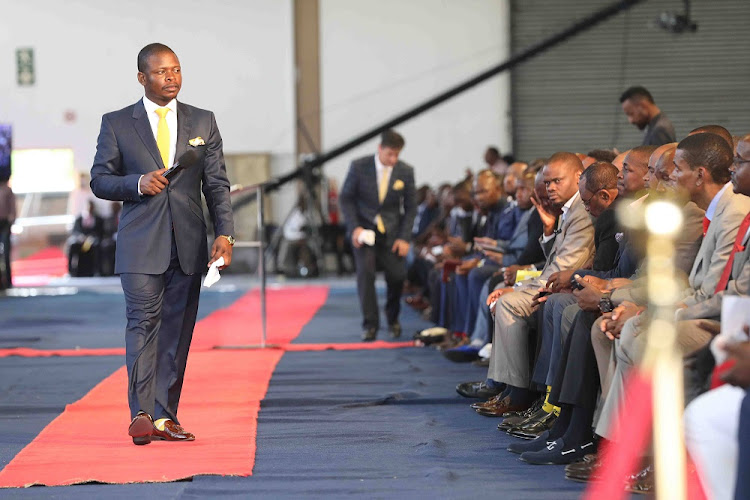 Church leaders have said Prophet Bushiri has tried his best to take responsibility for congregants losing their money in an investment scheme.
Image: Thulani Mbele

Investors who put their faith in an investment scheme with links to pastor Shepherd Bushiri's church are out of pocket after their money was "lost".

About 250 members of the Mpumalanga branch of Bushiri's Enlightened Christian Gathering church have reported the losses to church leaders and to the Hawks. The members had invested the money with a senior pastor at the church, Nicholus Mgiba, who is CEO of Merger Chen Solutions (MCS).

Hawks spokesman Hangwani Mulaudzi said they were investigating the reports.

Though no figures are known, other investors from Limpopo, the Eastern Cape and Gauteng are also affected. In Mpumalanga, members said they had invested R10m.

According to a document that investors claim was given to them by MCS, and which the Sunday Times has seen, the congregants were promised huge returns.

Read more on the Sunday Times

Bushiri's flock out of pocket after cash 'lost' in investment scheme

Hometown in Malawi coins it on visits.
News
2 years ago

Bushiri's lawyers will fight for him to keep his luxury jet

Self-proclaimed prophet Shepherd Bushiri’s private jet is subject to an application of attachment by the Asset Forfeiture Unit (AFU).
News
2 years ago

They came from near and far to pledge their support for the self-proclaimed prophet Shepherd Bushiri - who they claim saved their lives.
News
2 years ago
Next Article