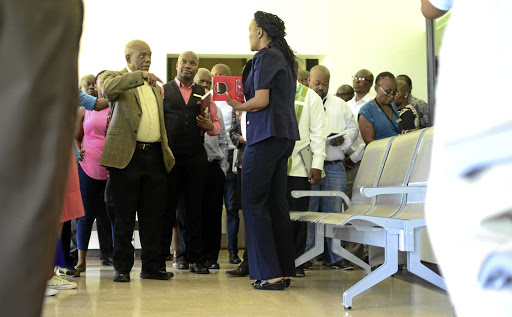 Mentally ill patients and their nurses at a new North West psychiatry hospital are forced to walk through overgrown grounds to reach the facility.

Even reaching the inside of the new Bophelong Psychiatric Hospital in Mahikeng does not provide much relief, given its inadequate conditions which include lack of bedding.

Patients are still being housed at the old facility which should have been decommissioned by now, and walk to the new hospital building for treatment and observation by medical staff.

The patients include convicted criminals and those undergoing trials who have been referred by the courts for psychiatric observation.

This was revealed yesterday during a visit by premier Job Mokgoro.

North West hospitals and clinics are fast running out of medication.
News
3 years ago

The premier said he was shocked to hear that nurses had to endure the discomfort of travelling nearly 500 metres with mentally ill patients; some of them convicted criminals because there were no beds in the new hospital.

"The financial provision is there, it's inexcusable, we are saying sorry to the community ... we are committing to correcting this," Mokgoro said.

The management of the hospital told Mokgoro that the hospital, which was officially opened in 2016, was not fully functional because there was no bedding for the patients.

Mokgoro found, among other poor conditions, uncut grass, leaking ceiling and shoddy workmanship in the entire structure which cost the health department over a billion rand to build.

The whole complex was budgeted for R1.5bn and construction began in 2010, but yesterday the hospital looked like it needed urgent renovations.

The troubled North West health department was placed under administration in May last year following years of maladministration, which led to poor healthcare services at the province's public hospitals.

Beds at the new facility are cement structures which need to be topped with mattresses to create beds. A dismayed Mokgoro found this bedding plan unconducive.

Health workers in North West on Monday kicked their colleagues out of the government building as they protested the reinstatement of head of ...
News
3 years ago

"If you link the structure, the engineering to purpose, the service that facility is supposed to serve, you find that the two don't correlate," he said.

He said some of the furniture are made out of steel, making it inappropriate for the patients.

"Rather use rubber for instance, beds that are made of concrete and cement that could not be useful for the kind of behavioural tendencies... (of) mentally ill patients."

Health MEC Madoda Sambatha said the contractor who was awarded the tender was going to be recalled for the shoddy workmanship that was identified.