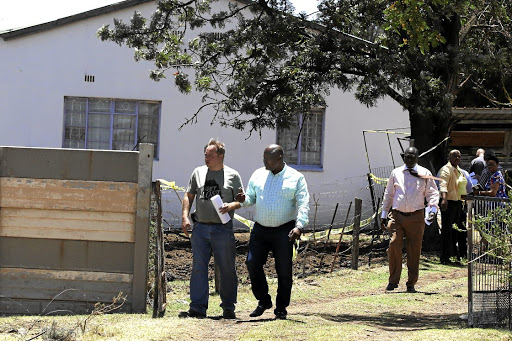 The case against former Kaizer Chiefs striker Mike “Sporo” Mangena has been postponed to April.

Mangena and his three co-accused made a brief appearance in the Randfontein magistrate’s court on Thursday. Dressed in a black suit and a striped T-shirt, Mangena was carrying a small knobkerrie covered with beads.

The case was postponed to April 16 to allow for a decision to be made by the Director of Public Prosecutions (DPP) on representations which have been made by the defence. The DPP is also expected to make a decision on whether the matter will proceed at the Randfontein magistrate’s court or will be moved to another court.

Mangena’s lawyers declined to give details of the representations they have made to the DPP but Sowetan understands that they want the state to drop the charges as they believe there is no evidence linking the accused to the crime.

Mike "Sporo" Mangena intends to plead not guilty to a charge of having a drug manufacturing plant on his farm.
News
3 years ago

The court also granted Mangena his request for the condition for him to report to the police station to be scrapped. Mangena  has had  to report to Booysens police station every Monday between 6am and 6pm. He is out on R50,000 bail while his co-accused are in custody.

Mangena, 60, was arrested in November last year along with Morena Maqoaelane, 26, William Kazipata, 34, and Kennedy Tsogolane, 24.

Police raided his farm in Hillside, Randfontein, where they found a drug-manufacturing plant.

The drugs-manufacturing barn was situated on the farm which also has chickens, goats, cattle and ducks. Inside the barn police said they found a spillage dryer tank, gas cylinders, plastic drums and a number of zinc basins full of chemicals which were allegedly used to produce mandrax.

Police said the drugs were produced on the farm but not packaged on the plot. The former Kaizer Chiefs, Wits, Durban Bush Bucks, Mamelodi Sundowns and Moroka Swallows striker has denied any involvement in the drug-manufacturing plant.

He has denied any involvement in drug manufacturing and said he had no knowledge of what was happening on the property.

Mike Mangena has been granted R50 000 bail.
News
3 years ago