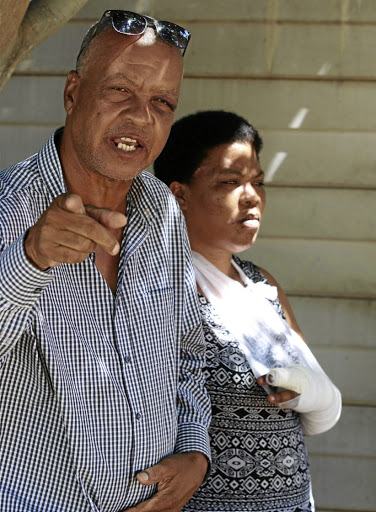 Roland Scott and his daughter Shirley Scott were allegedly assaulted by their farm tenants. /Antonio Muchave

Two members of the Modimolle Community Development Trust in Limpopo claim to have been assaulted in a racially motivated attack.

The pair, Roland Scott and his daughter Shirley Scott, alleged that tenant Yoland du Preez called them by the K-word and physically attacked them when they went to demand documents relating to the lease agreement, because Du Preez had not been paying for the past five years.

They are among 156 community members who successfully claimed the Middlefontein farm between Modimolle and Mookgopong in 2004.

Roland, 70, said he drove to the farm with his daughter Shirley on Monday to have a meeting with the tenants and other committee members.

"When we got to the farm, we parked our car under a tree waiting for the other committee members to arrive.

"That's the portion of the farm where the Du Preez family is operating their trucking business," he said.

Roland, who inherited the portion of the farm from his maternal grandmother, said he was shocked when he was accosted by an enraged female tenant who hurled the K-word and demanded they leave with immediate effect.

KwaZulu-Natal police are investigating a case of assault with intent to do grievous bodily harm against a group of men who allegedly threw punches ...
News
3 years ago

Peter-Paul Ngwenya‚ charged with crimen injuria for a k-word rant‚ insists that he is being falsely accused by people conspiring to have him jailed.
News
3 years ago

"I attempted to explain to her that we were not there to fight, because I know them and we have had several meetings with them. She then
unleashed a hot klap on my face and the other lady rushed to lock the gate.

"A white guy came and opened the gate. He came and flipped me on the ground and started kicking me."

Shirley, 41, told Sowetan that when she tried to break up the fight, she was also assaulted.

"My father was on the ground when I tried to pick him up. The white man punched me and when I attempted to block the fist it broke my finger," she said.

They opened a case of assault and kidnapping but claim that the police were hesitant to arrest their assailants.

Police spokesperson Col Moatshe Ngoepe confirmed that Roland alleged that on Monday at about 12pm he was assaulted by a man known to him following some disagreement concerning a farm he rented out.

"There is no arrest yet pending police investigations. We will also investigate that police are hesitant to make an arrest."

"He assaulted me and I had to retaliate."