It's not yet Uhuru for Gauteng housing staff 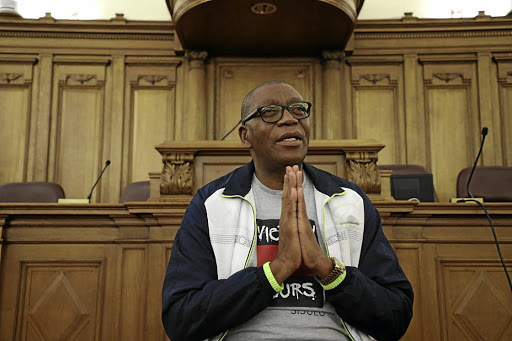 Gauteng human settlements MEC Uhuru Moiloa is being accused of "dumping" his staff at an "unsafe" Johannesburg inner city building while he occupies a cushy office in affluent Killarney.

And to top it all, Moiloa is holding departmental meetings in Sandton while other officials of the department fear for their lives at a "shaky building" in the Johannesburg CBD.

Gauteng's human settlements department moved offices from the Bank of Lisbon building, after it caught fire five months ago - claiming the lives of three firefighters.

Moiloa worked from the same offices until the disaster. Moiloa's staff are now housed at 11 Diagonal Street in a building they claim is unsafe.

Their fears mounted when former departmental head Matilda Gasela told them in December that "it is normal for a building to shake" when they raised concerns with her.

"What I said is that we sourced advice from experts and we were told that it is not abnormal for a building to shake, particularly when you are on a high floor," Gasela said.

Officials who asked not to be named said Moiloa was "not leading by example" as he was operating from "safe" offices at the Housing Development Agency in Killarney.

"The general feeling among workers is that the MEC and HOD are not in touch with our struggles because they are housed elsewhere where it is safe when we are subjected to such terrible conditions that put our lives at risk.

A 77-year-old woman has got her happy ending after years of waiting to be a rightful owner of her home.
News
2 years ago

"All we are asking for is, let them come and have offices in the same space so that they can put us at ease," charged one official.

"We are facing similar problems with those we had at the Bank of Lisbon building. Workers have been reporting insect bites, lack of proper air-conditioning and many other issues, including cracks at the basement, [and] the movement of the building."

Department spokesperson Lebo Keswa claimed that no safety concerns had been brought to Moiloa's attention.

Keswa confirmed that Moiloa was operating from Killarney and holding meetings in Sandton.

She said the MEC was actively involved with the department of infrastructure and development to ensure that all buildings occupied by human settlements officials were compliant with health and safety standards.

"The department values the safety of the officials... There has been continuous engagements with landlords to ensure that there is compliance.

"The department's new offices are under renovations and staff are expected to be moved there in the upcoming months," Keswa said.

Public sector union Nehawu chairperson at human settlements William Maphutha said they were fighting for the safety of the workers.

"As Nehawu branch executive committee, we have taken a decision that we are not going to take any risks with members' lives, we will fight tooth and nail to make sure the safety of workers comes first."