Seven arrested for public violence at Mangosuthu University of Technology 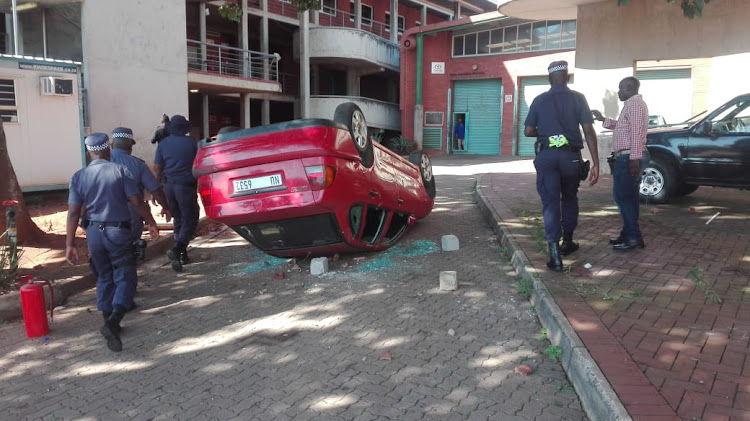 MUT students allegedly overturned a car during protest action at the campus on Monday
Image: Supplied

Seven students were arrested for public violence at the strife-torn Mangosuthu University of Technology (MUT) in Durban on Monday.

This follows protest action at the Umlazi campus, where students blockaded the entrance to the institution with boulders and bricks and allegedly overturned a car.

Metro police spokesman Senior Superintendent Parboo Sewpersad told TimesLIVE that seven people had been arrested for acts of public violence at the campus.

The university said in a statement: "Executive management has subsequently met with the students and will regroup and meet them at 12pm."

Codesa Gwala, MUT SRC president, says he knows of five students who were arrested. He claims they were provoked by police. #MUTshutdown pic.twitter.com/v4347bihxy

The university said students were demanding fee concessions, a reversal of a fee increment, that the library and clinic hours be extended to 24 hours and that the number of printers across campus be increased.

In addition, the SRC, according to the statement, has claimed that some students had not received allowances.

"We agreed on fee concessions and have been implementing as per agreements with the SRC. However, in today’s meeting the SRC informed us that, because Friday was the last registration day, some students could not register.

"This means that the university will have to extend its registration," the statement read.

"Only 46 had wrong accounts and their issue is being resolved. The SRC has indicated that there are more payments still outstanding. Executive management has requested the SRC to produce the evidence which they claim."

On the issue of extending library and clinic hours, the university said the resources and planning department would advise at a meeting scheduled with the SRC "on how best we could deal with this".

The university said it would also provide feedback to the SRC on the issue of the fee increment, when the parties met on Monday.