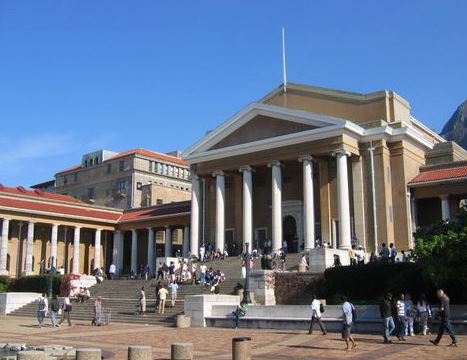 A former SRC president of the University of Cape Town has been accused of assault.
Image: UCT Student @UCTStudent via Twitter

It is believed that the university's current SRC secretary-general‚ Azola Krweqe‚ was one of the women who was attacked during an altercation outside a bar in Cape Town.

A video posted on Twitter by Asanda Lobelo‚ the current SRC president‚ purports to show Mngomezulu involved in an altercation with at least one individual. In the video a male voice can be heard saying‚ “Mthombisi! Hitting women! Hitting women! The only thing ... Hitting women!”

The university said it was investigating an incident of “gender-based violence”.

Krweqe has meanwhile started a crowdfunding campaign to raise R5‚000 to replace her prescription glasses‚ which were smashed in the incident.

She posted on the campaign page that she and her friends were physically assaulted by "a drunk man”.

“He slapped us‚ choked us‚ punched us and even headbutted one of us. In the process‚ however‚ he broke my prescription glass. I have received a lot of support around the incident emotionally as well as with laying the criminal charge. However‚ I am a student who attends lectures and needs glasses to study. Please assist with any amount that you can‚” she wrote.

Without law reform to ensure the disclosure of stats, academia may become a sexual predator's haven.
Opinion
2 years ago

Krweqe also posted pictures on her Twitter profile of bruised lips and arms‚ along with a picture of Mngomezulu with the statement: “The former UCT SRC president is a violent and dangerous man."

Mngomezulu has strongly denied the allegations‚ saying he was taunted and slapped. He has vowed to take action to clear his name.

Speaking to SowetanLIVE‚ however‚ Mngomezulu claimed he was slapped first by Azola in an attack he claimed was part of “a greater political plot because of my previous political association”.

“I'm taking this accusation extremely seriously. Therefore I'm following due processes in clearing my name‚” he wrote in an e-mailed response.

Mngomezulu claims that Krweqe had been threatening to slap him “for weeks”.

“I didn't take it seriously until it happened this past Friday night. I was at [a] bar when she came to the table I was sitting at to provoke me‚ calling my SRC term as president useless‚” he said.

“When we had an argument over that‚ she slapped me. I was stopped when I wanted to [retaliate]. She went to call a group of her friends‚ who then were shouting at the bouncers‚ instructing them to take me out. I was taken out. The bouncer told me to wait outside for some few minutes‚ they'll then allow me back in because they saw I was the one who was actually being attacked. They then did allow me back inside after approximately four minutes.

"When I went back inside‚ they continued to shout and threw insults at me. The people who were there advised me to keep quiet‚ which I did.

“I was waiting for cab outside when a group of people came and attacked me. There was a scuffle as some people tried to intervene to stop the attack. I then took a cab and left.

"The following day I was tagged in a post‚ being shamed by the current president - who was not even there when this all happened - with false details. There were two males who were also attacking me; not just women. It's unfortunate the manner in which these accusations have been made against me‚” said Mngomezulu.

A 32-year-old man is expected to appear in the King William's Town Magistrate's Court on Monday for allegedly raping a 99-year-old woman.
News
2 years ago

In a statement following the incident‚ the university said: “The university has been in contact with the survivors for support and assistance. UCT will also take the necessary appropriate measures to investigate the matter‚ in line with the university’s social justice policies and in accordance with the code of conduct for students.

“UCT is deeply concerned about this incident and condemns any form of violence‚ particularly against women‚ in the strongest terms.

“The university will continue fighting against the scourge of such violence and remains committed to striving towards eradicating this abhorrent conduct from our campus community."

Posts on the victims’ social media pages indicate that a criminal case has been opened with the police.