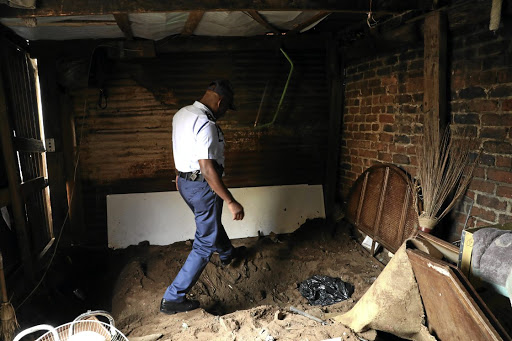 Captain Moscow Shihambe inspects the scene where bodies of two men were found buried in a shallow grave in a shack in Troyeville, Johannesburg.
Image: SANDILE NDLOVU

Police have applauded the community of Troyville‚ Johannesburg‚ after a tip-off that led to the arrest of two men in connection with the torturing‚ killing and burying of two men under a bed in a shack.

The tragedy‚ which happened last month‚ was described as horrific by police spokesperson Richard Munyai.

Munyai said police had received a tip-off after the two men had allegedly been on the run after the incident.

"One of the men‚ originally from the Eastern Cape‚ was ready to run away. When the police took to his place‚ he had already packed all his belongings but was arrested immediately‚" he said.

Meanwhile the second suspect was also found at his home after weeks of not being there.

"It was through the tip-off we received from the community members that the suspects‚ aged 31 and 43‚ were subsequently arrested‚" said Munyai.

Police earlier learned of the incident after a neighbour‚ who suspected foul play‚ went to the Jeppe police station.

Two tortured and buried in a shack

Loud screams came out of a backyard shack in Troyeville, Johannesburg, for about five hours.
News
3 years ago

However‚ when police arrived at the shack‚ everything at first appeared to be in order.

The shack was cleaned up‚ everything was in order like in a normal household … but the complainant and other neighbours were certain that something had happened to the two men‚" said Munyayi earlier.

The two deceased men had been beaten up for several hours‚ with the perpetrators questioning them about the whereabouts of a firearm‚ according to eyewitnesses who spoke to the police.

Munyayi said a K9 unit was summoned to the scene where sniffer dogs made straight for a bed.

The bed was moved to reveal a "gruesome discovery"‚ Munyai said.

The two male perpetrators allegedly dug a shallow grave‚ placed the bodies in it and covered them with a mat‚ before the bed was moved into place.

A 30-year-old woman has been taken into custody for questioning over her part in the murders.

She is alleged to have beaten the deceased and to have cleaned up the scene.

The woman has since been released on bail while the two men remain in police custody‚ according to Munyai.