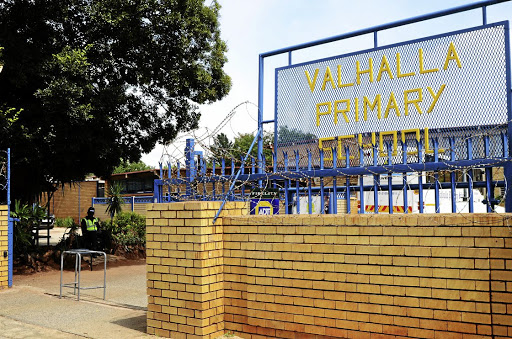 Valhalla primary school in Centurion, Pretoria, where a teacher has been accused of assaulting 24 pupils between the ages of 10 and 14.
Image: Mduduzi Ndzingi

Parents of pupils who were allegedly sexually assaulted by a teacher were yesterday left angry and disappointed after the man was released on bail.

The 55-year-old Afrikaans teacher was granted R8,000 bail in the Pretoria magistrate's court.

He is charged with 24 counts of sexual assault after he allegedly violated 24 pupils aged between 10 and 14 years at Valhalla primary school in Centurion.

Four other minor boys were yet to submit statements against the teacher, which could see his charges increased.

In releasing the man, magistrate Desire Stigling said it was in the interest of justice to grant the 55-year-old bail.

She said it was unlikely that the accused would be in contact with the pupils and school as he was suspended.

A mother's worst fears were realised when her 11-year-old daughter confirmed this week that her teacher had touched her inappropriately.
News
3 years ago

The accused's bail conditions include not being allowed to enter the Valhalla suburb in Centurion and to hand over his passport.

Speaking on behalf of parents, gender activist movement NotInMyName's spokesperson Themba Masango said parents of the pupils were upset with the court's decision to grant the teacher bail.

Masango said: "The parents are gutted. What is more painful [for them] is that there were complaints that were brought forward way before this guy was arrested."

He blamed the school for failing to report complaints about the teacher's behaviour to authorities.

"The deputy principal failed to bring the matter of complaints to the attention of the investigating officer. The parents want to know what it is that he is hiding or if he wanted to save the school embarrassment because there are children's lives at risk."

The teacher was arrested after allegations surfaced that he had sexually assaulted several children in 2017 and 2018.

A 55-year-old teacher has been removed from a primary school in Midrand following allegations of sexually assaulting 23 pupils.
News
3 years ago

The allegations surfaced during a visit from members of the Tshwane metro police department on January 23 to teach pupils about sexual offences and abuse.

Gauteng education MEC Panyaza Lesufi said he was disappointed with the court's decision to grant the man bail.

He said the department would be exploring avenues that would allow it to subject teachers to random vetting tests for pupils' safety.

"It's difficult to vet someone who is already in the system. It becomes difficult, so we'll be having a meeting with the other MECs and the minister and we will be approaching the South African Qualifications Authority to see if we can't have random vetting tests."

The matter was postponed to March 7 for further investigations.