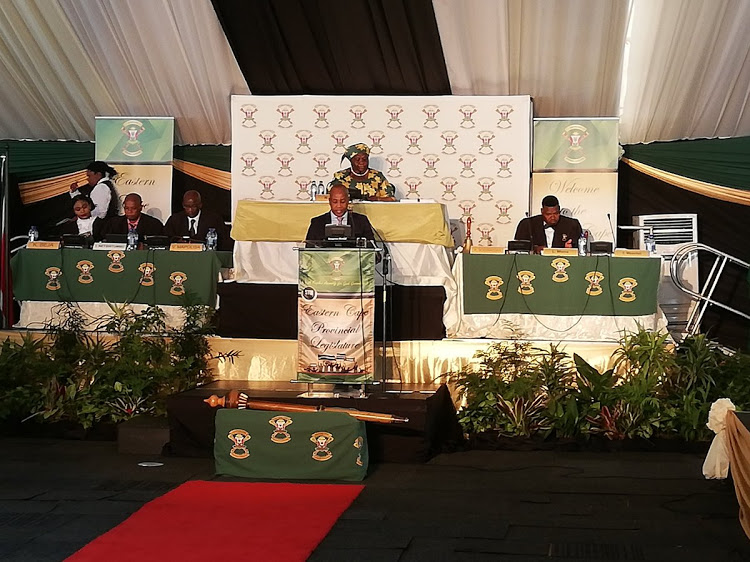 Phumulo Masualle delivers his final State of the Province Address as premier of the Eastern Cape.
Image: Nomazima Nkosi

The Eastern Cape government is ready to roll out the National Health Insurance (NHI) scheme to the rest of the province‚ premier Phumulo Masualle said during his state of the province address in Bhisho on Friday.

Masualle said they would focus on building on infrastructure progress made in the NHI to revitalise provincial and regional hospitals.

The project had been piloted in the Alfred Nzo and OR Tambo districts.

Masualle‚ whose speech largely focused on his past five years as head of the government‚ said the pilot project had yielded valuable results.

"We are now ready to mainstream to the rest of the province. This includes the introduction of doctors to the primary health-care facilities through general practitioner contracting‚ as well as the provision of pharmacist assistants to improve the availability of medicine (at clinics)."

Speaking on the economy‚ Masualle said strides had been made to improve the lives of people in the province and this could be attributed to the commitment of major investors.

"Despite perennial challenges of a constrained global and domestic economy‚ coupled with a tight fiscal environment and a long drought‚ the Eastern Cape government has made a positive contribution towards the betterment of the lives of people in the province‚" he said.

Masualle said the address was aimed at laying a solid foundation for the sixth administration that would take over after the May 8 elections.

Masualle highlighted education‚ health‚ agriculture and infrastructure achievements during his term at the helm.

"At the start of the term we set out to transform the Eastern Cape economy. Indeed‚ a great deal of work has been done and much ground has been covered‚ both by this fifth administration and other administration.

He added that disciplinary action had been taken against officials who had contributed to the decision by the South African Civil Aviation Authority (SACAA) to downgrade Mthatha airport from category 4 to category 3.

He said they were in the process of instituting consequence management against those responsible.

"I can report here that an announcement regarding the restoration of Mthatha airport to CAT 4 can be expected soon‚" Masualle said.