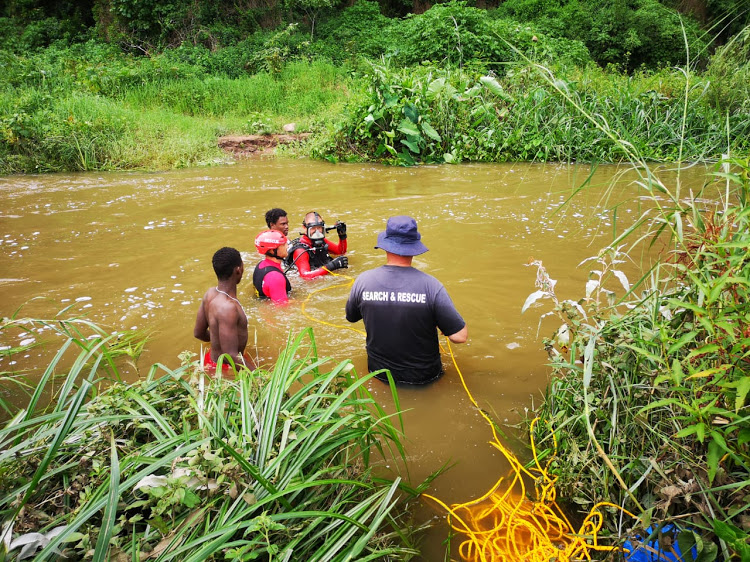 The grief-stricken granny of a nine-year-old girl who was swept away while swimming with four friends in the Umlazi River in Durban on Friday was not at school because she didn't have decent civvies.

Thandiswa Mvuyo said the grade 3 pupil‚ Amahle‚ had not gone to school because it was "civvies day" (when pupils don't wear their uniforms) and she did not have good clothes to wear.

"I went to visit a neighbour and told her to not go anywhere. I don't know why I said that. But she looked a little bit down‚" the 56-year old granny said.

But as Mvuyo was returning from the neighbour's house‚ she was confronted by a wailing woman who told her that a child had drowned in the river.

"I asked if Amahle was there and she didn't know and we rushed to the river where the other children confirmed my worst fears‚" she said.

She said she was told by a nine-year-old girl that she had tried to pull Amahle out while she held on to a branch but she could not help her‚ she said.

She said the oldest of the children had run away‚ leaving the others behind.

"I'm still too emotional to say anything at this stage‚" said the missing girl's mother‚ 30-year-old Zonke Mvuyo‚ while clutching her two-month-old baby in their tiny RDP home.

A four-year-old girl drowned after she fell into a storm water drain on Monday afternoon in Kagiso‚ Krugersdorp.
News
4 years ago

Tears welled up in the eyes of the mother of three and she ran into the bedroom where she sobbed quietly.

One of the surviving girls told SowetanLIVE sister publication TimesLIVE that they had gone to the river for a swim in the morning but Amahle couldn't cope with the current as she could not swim properly.

The nine-year-old girl said the last time she saw Amahle‚ she was facing up with only her head and arms out of the water as she was being swept away by the current.

"She started crying and we didn't know what to do. I grabbed a branch and managed to come out of the river. I don't know what happened to her‚" she said.

Scores of shocked residents had gathered at the scene of the accident hoping the girl could be found.

An official on site said divers from the Durban police and the metro police search and rescue units were deployed to H Section‚ Umlazi.

"Four children were playing in the river when they were swept away by the fast flowing water. Three of the children were able to get out of the water. The fourth‚ Amahle Mvuyo‚ disappeared below the surface."

"While a dive operation was conducted by the divers‚ the SAPS Airwing continued downstream with an aerial search‚" the official said.

He said that the K9 dog squad was also helping.