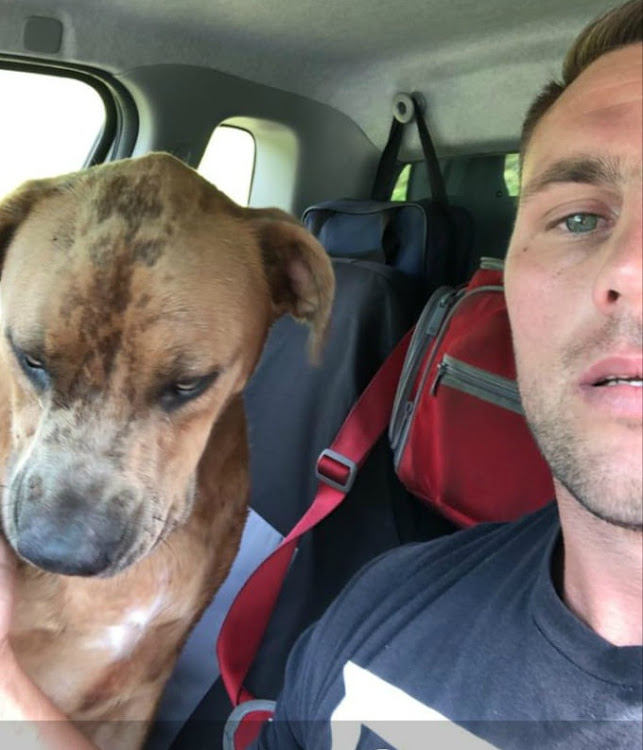 Blue is pictured moments after being reunited with owner Blake Louwrens after a massive 10-day search went viral on social media and brought together a community of complete strangers to #rescueblue.
Image: Supplied

A Durban family is feeling anything but blue after a 10-day search for their beloved family pet - which involved drones‚ thermal imaging‚ sniffer dogs‚ rock climbers and total strangers - had a happy ending.

The Louwrens family from Dawncliffe‚ Westville‚ endured an agonising 10 days after their three dogs - Dakota‚ Busta and Blue - snuck out of their property on February 3 and went to the nearby Paradise Valley Nature Reserve.

Karin Louwrens said Busta was the only one to make his way home‚ while Dakota was found on a rock near the Umbilo River which runs through the reserve.

However‚ Blue‚ the family's two-year-old female Boerbul cross‚ was nowhere to be found. This sparked a rescue effort that soon went viral on social media and brought together a community of complete strangers to #rescueblue.

Louwrens told SowetanLIVE sister publication TimesLIVE on Wednesday that the family had been distraught.

An armed-robbery suspect was stopped in his tracks by a bullet to the leg after he tried to stab a police dog and threatened officers who were ...
News
3 years ago

They posted news of the disappearance of their dog - which they had adopted from a shelter - on Facebook and created a WhatsApp group appealing for volunteers to help them search Paradise Valley.

"For some reason the appeal to #rescueblue touched the hearts of the local community and snowballed from there. My faith in humanity has been completely and utterly restored‚" she said after total strangers from Camperdown to Sunningdale responded to the pleas. They even received an offer to help from someone in Dubai.

She said some volunteers arranged lifts with complete strangers and walked through the reserve. Others printed flyers or provided supplies for the search team.

"When the terrain became rocky‚ rock climbers joined. And bird experts advised on how to navigate a large eagle's nest. Ropes and abseiling equipment appeared.

"When the search turned underground‚ an online supporter provided maps of underground sewerage pipes and drains.

"When the search bordered on private properties‚ people contacted their local community groups and suddenly we had residents responding‚ 'You can access that part of the river from my home - you're welcome!'"

Louwrens said the search continued for nine long days. Some good came out of it as they rescued another dog that had been lost.

"One volunteer had to be airlifted out of the reserve‚ but that didn't deter anyone‚" she added.

Then on Wednesday morning‚ her son Blake received a call from a resident who said he heard movement in his yard. "Blake went out there and after a while‚ he found Blue‚" she said.

"She was covered in ticks‚ had lost a lot of weight‚ and had a deep gash in her side with lots of scratches.

"There were tears. We are so happy and so grateful for finding her and for the kindness that people have shown."

Louwrens said it was her birthday on Tuesday and all she wished for was that Blue would be found. "But we found her on the 13th‚ so it is very lucky for us."

She said Blue was receiving medical treatment at their vet and would be taken home on Wednesday afternoon.