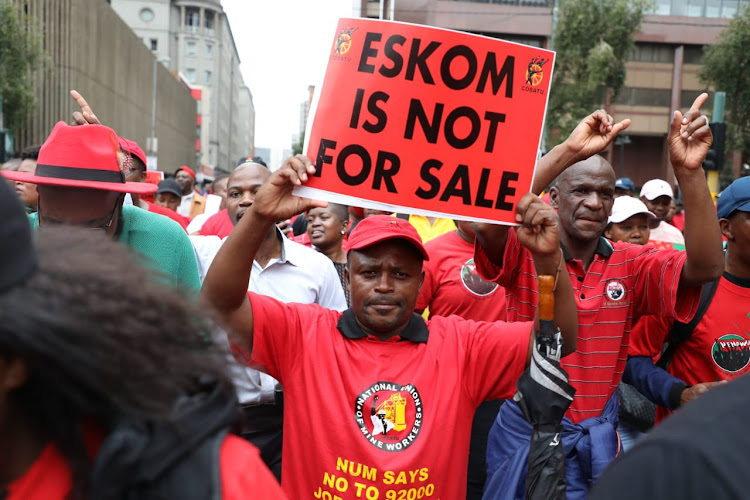 Cosatu and its affiliates on Wednesday marched to the Gauteng legislature in protest against lack of jobs and retrenchments both in the public and private sectors.
Image: Thulani Mbele

As Cosatu embarked on a national strike on Wednesday to highlight high unemployment‚ an economist warned that such strikes in fact cost the country investment and potential jobs.

The economist also cast doubt on whether the government's economic stimulus and recovery plan would make rapid inroads and reduce unemployment.

The union federation embarked on a one-day strike in major centres around the country to highlight job losses in a number of sectors.

According to the latest Quarterly Labour Force Survey released by Statistics SA on Tuesday‚ unemployment decreased by 0.4 of a percentage point to 27. 1% in the fourth quarter of 2018 compared to Q3 of 2018.

As SA wakes up to the threat of a massive strike against job losses, nurses affiliated to the Democratic Nursing Organisation of SA (Denosa) said ...
News
3 years ago

Despite this decrease‚ the overall unemployment rate remains chronically high.

Economist Mike Schussler said: "We have to realise that the rest of the world is getting out of high unemployment. Our unemployment has been in the mid-20% for the past two decades and this creates inequality."

Schussler said he did not think Cosatu's march or government interventions would help.

Rather‚ Cosatu's strike added pressure on businesses at a time of high unemployment.

"Some of these strikes we have had have cost the economy huge amounts of investment‚ potential‚ jobs and the like‚" Schussler said.

He said government should start thinking like first-world economies where there are fewer regulations and economies are designed to encourage growth.

Schussler cited the case of the US which has unemployment of less than 4% and China which is about 6%.

He said the government had to find ways to encourage businesses to invest.

Schussler described the government's stimulus package as more about ensuring that blockages were removed to ensure there were opportunities for growth in a number of sectors.

The department of basic education is "extremely concerned" that schools across the country may be disrupted by the national Cosatu strike today.
News
3 years ago

"We need to find out what is blocking growth in the tourism industry. How can we make mining more secure and how can mining aid this economy?" Schussler said.

In its predictions on the upcoming budget speech‚ PwC said finance minister Tito Mboweni would be looking to take a practical approach to increasing economic growth.

"However‚ these strategies will take time to implement and the structures and budgets have not been formally confirmed. Ultimately‚ this brings about the question as to how government will support these strategies‚ and some further details may emerge in the February budget."