DA leader Mmusi Maimane says President Cyril Ramaphosa should not absolve himself from the role he played in government under former president Jacob Zuma.

Speaking on Tuesday during a debate in parliament on the president's state of the nation address last week‚ Maimane said Ramaphosa was there all along while the national debt rose to almost R3-trillion and the economy dipped into recession.

Eskom and other state-owned companies fell under the political oversight of Ramaphosa when he served as Zuma's deputy.

Maimane also expressed surprise at Ramaphosa's statement that he was shocked when Eskom implemented stage 4 load-shedding on Monday. "This morning's headlines say that you were 'shocked' by stage 4 load-shedding. How can you be shocked‚ Mr President? You were there all along‚" he asked him.

Referring to the numerous motions of no confidence in Zuma‚ Maimane told Ramaphosa: "You didn't arrive on the scene a year ago. Eight times you had the opportunity to save our country from Zuma and eight times you voted to protect Zuma.

"Your record will always reflect: 100% behind Zuma‚ a man you described as a 'very strong president’.

"You were there as our national debt skyrocketed to almost R3-trillion. You were there as we dipped in and out of economic recession‚ while our peers both here in Africa and throughout the developing world raced ahead of us."

In reference to revelations at the state capture commission and other similar inquiries‚ Maimane said ANC leaders reaped the benefits of office over the past nine years‚ while ordinary people were shut out as the economy took a plunge.

"You speak of nine wasted years to absolve yourself of the integral role you played as second-in-command. But let's be honest‚ while these might be nine wasted years for South Africa‚ they most certainly were not wasted for the ANC.

"These were golden years for the black‚ green and gold. Everyone made money. Everyone got a security upgrade. Everyone got a new car. Everyone got deals for their family members‚ tender‚ shares and positions on boards. Even you and your son benefited."

Maimane said the national election scheduled for May 8 would be a referendum on the ANC. "Do we want another five years of unemployment‚ load-shedding and hopelessness? Or do we want to take a different road?" he asked.

"It will be our chance‚ as South Africans - black‚ white‚ Indian and coloured - to stand together and usher in the change our country so desperately needs." 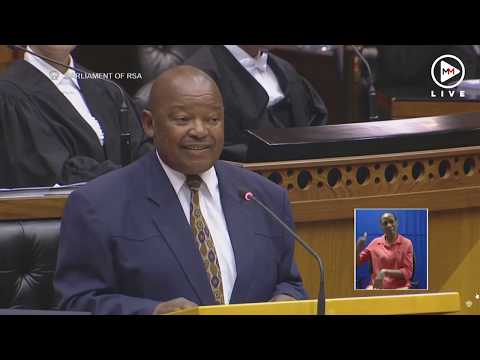