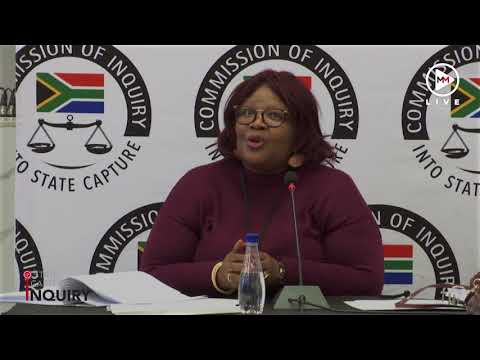 Vytjie Mentor has has accused the state capture commission of lacking fairness.

Former ANC MP Vytjie Mentor has accused members of the state capture inquiry's legal team of being biased against her evidence.

Mentor‚ who initially testified before the inquiry in August 2018‚ came under heavy questioning from commission advocate Mahlape Sello on Tuesday. Mentor was back in the hot seat after investigators from the commission dug into some of the claims she made in 2018.

On Monday‚ Mentor faced questions about her state visit to China in 2010 and a trip from Cape Town to Johannesburg during which she says she was taken to the Gupta family's Saxonwold home and offered a ministerial position.

"For the better part of me being on the witness stand from August last year to date‚ I have felt that I have had to deal with‚ in the main‚ issues that are not corroborating in any way my version before you in my testimony.

Former ANC member of Parliament Vytjie Mentor will be returning to the stand at the state capture inquiry on Monday.
News
3 years ago

"I have felt that all the time I have been made to feel like my role as a witness all the way is to explain and deal with whatever does not corroborate anything‚" she told the commission on Tuesday.

In an effort to reassure her‚ deputy chief justice Raymond Zondo‚ heading the commission‚ said all the evidence was treated equally.

"If I can’t say how you got to Saxonwold‚ there might be difficulty with saying‚ 'Yes‚ there was this encounter at Saxonwold.' Where you may think‚ why is this thing not being mentioned - it may be because the member of the legal team is not so concerned about that for now‚ but is concerned about what may be against you.

"I can assure you that this legal team is not intending to favour your version or not favour your version. What they are interested in is to make sure they ask questions which will enable me‚ when all this is over‚ to have enough evidence to make findings one way or another."