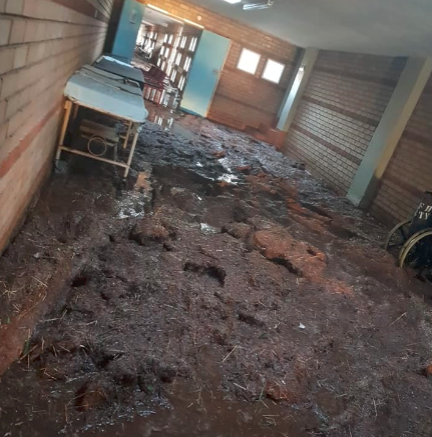 Inside Limpopo's Jane Furse Hospital, which was hit by a hail storm in December, which forced the facility to shut down.
Image: Facebook/Neil Muhluri Shikwambana

Limpopo's Jane Furse Hospital‚ which was forced to shut its doors after being damaged by heavy flooding in December‚ was reopened on Monday by health MEC Phophi Ramathuba.

"The hospital has been closed for repairing since then and community members around the Jane Furse area had to visit other hospitals such as St Ritas and Matlala Hospitals‚" her department said in a statement.

Emergency evacuations were implemented on December 21 when a severe hailstorm left the hospital flooded with rain water and mud and also caused sections of the roof to cave in.

Jane Furse Hospital in Limpopo had to be evacuated in the early hours of Friday, December 21 2018, after being hit by a severe hail storm.
News
3 years ago

While no injuries were reported‚ the department hailed nurses who delivered nine babies by candlelight during a resultant power outage.