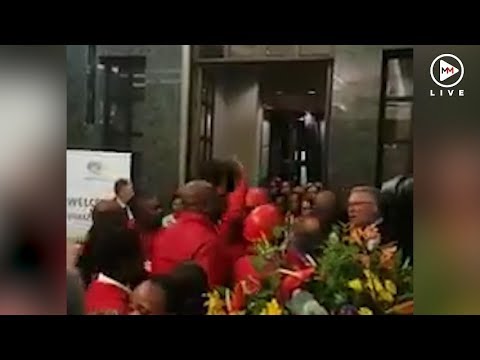 The DA said the video of the man who has been identified as EFF MP Marshall Dlamini slapping a parliamentary policing official is most unbecoming of a member of parliament.

The DA says it will lodge a complaint with parliament’s ethics committee after an EFF MP slapped a police officer at the state of the nation address (Sona).

"The MP is Mr Marshall Dlamini and his conduct is most unbecoming of a member of parliament - but hardly surprising as it fits in with the pattern of thuggery that the EFF has consistently displayed on the precinct‚" said DA chief whip John Steenhuisen.

"The DA will be lodging a complaint with the ethics committee in parliament as well as the powers and privileges committee to investigate the conduct of the MP concerned‚" he added.

A video has emerged of an EFF MP slapping a man in a suit during an altercation after the state of the nation address (Sona) in parliament on Friday.
News
3 years ago

Parliament and the African Christian Democratic Party (ACDP) have condemned the incident.

National assembly speaker Baleka Mbete and National Council of Provinces chairperson Thandi Modise said they "denounce in the strongest terms the alleged assault of a police officer stationed at parliament".

"It's illegal for them to slap someone‚" he said.