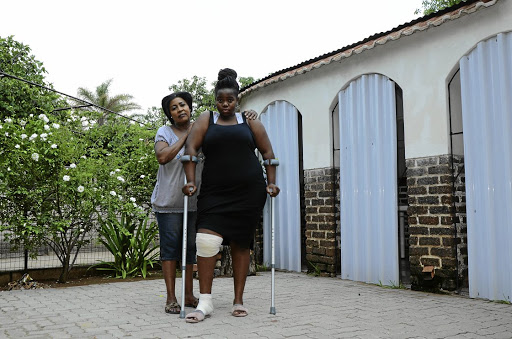 Sharon Ragebult is relieved that her granddaughter, Trimone, managed to escape the falling bridge with a few bruises. / Mduduzi Ndzingi

Sixteen-year-old Trimone Ragebult has had sleepless nights since she cheated death by an inch when the walkway bridge collapsed at her Gauteng school last week.

The grade 12 pupil at Hoërskool Driehoek in Vanderbijlpark was injured on her right leg and she now walks with the aid of crutches.

"I was walking with my friends coming from the assembly. Just before I walked off from the bridge, it fell. Everything went blank and I could not even hear others screaming," she said.

Trimone is one of the pupils who were injured when the walkway bridge collapsed last week Friday.

One of the pupils who died after the incident, Jandré Steyn, was buried yesterday. Unfortunately, Trimone could not attend the funeral as she complained that her body was still in pain.

"It hurts that I couldn't attend Jandré's funeral. I haven't had a proper sleep since the incident happened as I keep seeing bodies of pupils crushed by the bridge. I will never forget that day as I saw one of the pupils whose legs were cut off from his body."

'I will cry for many years': father of Hoërskool Driehoek pupil

It was a cloudy morning on Tuesday at Hoërskool Driehoek in Vanderbijlpark‚ which was rocked by tragedy last week.
News
2 years ago

A suspected conman who asked for money‚ saying his “brother” had perished in the Hoërskool Driehoek tragedy‚ has been exposed.
News
2 years ago

She said even though she received trauma counselling, she still got flashback of what happened on that fateful day.

"Other pupils were discharged and are recuperating at home. We wish all those injured speedy recovery," he said.

Trimone's grandmother, Sharon Ragebult, said it has been a difficult time for the family.

"That morning I got a call from one of her friends who was very hysterical, saying a bridge had fallen at their school. I could not make head or tail of what she was saying. I immediately rushed to the school which is 6km away," Ragebult said

"When I got to the school it was chaotic and I saw a couple of pupils covered with silver [foil]. I lost it thinking that my child was one of them. I was only relieved when a friend told me that she was alive but she sustained injuries."

She said Trimone's 10-year-old sister was badly affected by this incident. "She kept asking if her sister is going to die like their mother who passed away three years back. Even though my child is in pain, I thank God that she survived."