'FNB creator' Mulalo Negondeni scores a call to the derby 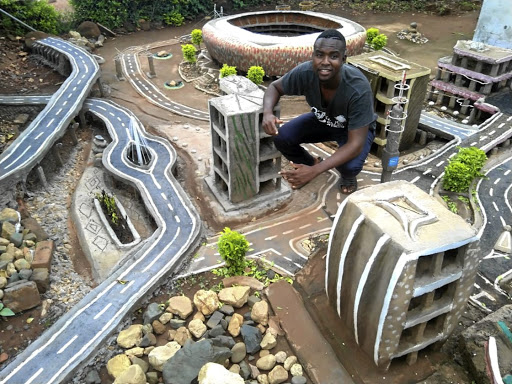 Mulalo Negondeni of Mukula village in Venda uses soil, sand, cement and recyclable waste materials to design his creations, like the FNB Stadium in the background.
Image: SUPPLIED

The architectural skills of a student from a Limpopo village have scored him funding for his studies and free tickets to tomorrow's Soweto Derby at FNB Stadium.

He has also designed a replica of the FNB Stadium, which he will visit and tour tomorrow with his family - his second visit to the venue.

Stadium Management SA, who manage the stadium, have invited Negondeni and his three guests to watch the Soweto derby between Orlando Pirates and Kaizer Chiefs tomorrow.

"I'm grateful for the opportunity afforded me," he said yesterday.

Negondeni is currently enrolled for a level 4 civil engineering for roads construction at the Vhembe TVET College's Makwarela campus in Sibasa.

The company would be funding his studies going forward as part of its corporate social investment project.

Negondeni first visited the stadium in 2017 when he went to watch the off-season Carling Black Label Cup match between the two biggest SA football teams.

However, this time around, Negondeni will be joined by his parents and younger sister in an all-expenses paid VIP treatment trip at the venue.

"Our special guests will arrive in Johannesburg [today] in the afternoon and we will pick and transport them to the hotel," said Grobbelaar.

"I first came into contact with the good architectural work Negondeni did on Twitter and was impressed by what I saw," he said.

Grobbelaar said he then contacted Negondeni and was immediately inspired by his passion and personality.

"And this is our way of appreciating what the young man did out of waste materials."

Negondeni's mother Nyadzanga, 64, said yesterday: "I want to thank God for making it possible for my son to achieve his dreams of displaying his talents for the world to see.

"I'm happy for him and will continue to support him."

It would be her first time going to the stadium.

The self-taught artist uses soil, sand, cement and
recyclable waste materials such as boxes and plastics to design his creations, which have made him the talk of many villages in Venda.

He has built malls, hotels and roads models using materials he picks up from dumps and at hardware stores.