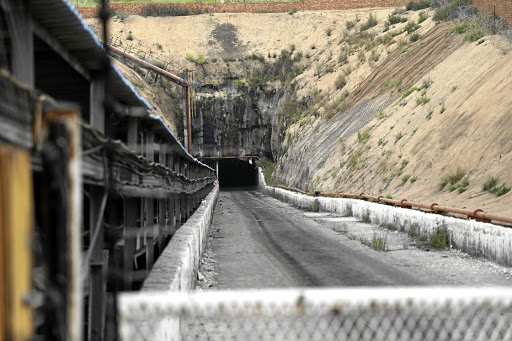 Gloria coal mine in Middelburg, Mpumalanga, was closed in September. Illegal miners has since moved in to strip the mine of copper cables and other valuables. /THULANI MBELE

A group of about 22 cable thieves miners are feared dead after they were trapped underground at Gloria Coal Mine in Mpumalanga after a gas explosion while six others died in a failed mission to rescue them.

The initial group of 22 had apparently gone into a shaft at the non-operational Gupta-owned mine near Middelburg, allegedly to steal copper cables.

According to the mine's business rescue practitioner, Mike Elliott, the illegal miners did not resurface after the gas explosion, sending panic in the community of Dunisa informal settlement - located about 30km from the disused mine.

The community is made of mostly unemployed people who survive on activities such as selling copper cables.

Elliot told Sowetan yesterday rescue teams could not access nor determine the point where it is estimated the explosion took place.

A thief has been sentenced to an effective 28 years in prison for stealing an overhead conductor with a scrap value of R27‚000.
News
3 years ago

The City of Tshwane says that residents who have been without electricity for the past seven days will finally get to have a warm shower later on ...
News
3 years ago

Elliot said the mine had a 15km radius with a network of multiple shafts spread around it.

He said the biggest challenge was lack of ventilation underground.

"The underground fans have stopped operating and the mine is flooded with methane which is highly explosive.

"Rescuers need to make sure that ventilation is present before attempting to start searching for the remaining people."

Elliot said a second group of about 30 people forced their way into the mine on Wednesday and tried to rescue the 22 who were trapped. Twenty-four of the 30, returned safely to the surface.

Police spokesperson Brig Leonard Hlathi said six people were confirmed dead while 22 were yet to be found.

"The sequence of events suggests that an unknown number of people trespassed into the mine between Sunday and Wednesday and police were called to the scene."

Hlathi said members of the community told police about the 22 illegal miners who had descended down the mine.

A resident, who asked not to be named, told Sowetan that a group of Lesotho nationals went underground in an attempt to save the lives of those trapped on Wednesday morning.

"The second group also failed to return because of the toxic gases underground
that were caused by the explosion."

A security guard at the mine, who asked not be named, told of how for months they had been involved in running battles with illegal miners who raided the mine to strip it of any item of value , such as copper cables and scrap metals, that they could lay their hands on.

Tshepo Lefela, a resident, said many in the informal settlement eked a living by selling scrap metals and copper cables scavenged from surrounding mines.

"This mine closed in September. It presented an opportunity for people to steal from it."