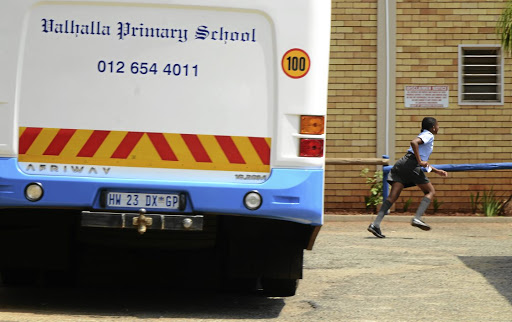 A 55-year-old teacher has been accused of sexually assaulting pupils between the ages of 11 and 13 at Valhalla primary school in Centurion.
Image: Mduduzi Ndzingi

A mother's worst fears were realised when her 11-year-old daughter, a grade 6 pupil,
confirmed this week that her teacher had touched her inappropriately.

The 35-year-old mother now finds it difficult to send her child to school after her teacher was suspended following allegations that he had sexually assaulted 23 girls between the ages of 10 and 12, including her daughter, at Valhalla primary school in Centurion, Pretoria.

Her daughter had not previously said anything about the incident which allegedly occurred last year.

"She is a quiet child and it was not easy to see that something happened at school. It was only when I heard about this incident through a parents' meeting that recently took place at the school [that I learnt about it]," she said.

She said parents were shocked as there was no communication received from the school.

A 55-year-old teacher was removed from the school following the incidents which allegedly happened in June but only came to light at a parents' meeting on Tuesday.

A group of parents gathered at the school yesterday demanding that the teacher not to be allowed on the school premises ever again.

A 55-year-old teacher has been removed from a primary school in Midrand following allegations of sexually assaulting 23 pupils.
News
2 years ago

Another parent, a mother of two children at the school, said she was disturbed by the incident.

"You would not expect something like this to happen at school. Teachers are supposed to be parents to our children, not to see them as their sex toys," she said.

Police spokesperson Col Lungelo Dlamini confirmed that a case of sexual assault had been opened against the teacher.

"No one has been arrested at the moment as we are still interviewing the victims," Dlamini said.

The #NotInMyName movement, a group campaigning against women and children abuse, also camped outside the school.

Secretary-general of the movement, Themba Masango, said South Africans should be hanging their heads in shame.

"We are concerned about the safety of our children. We are calling for police to do a thorough investigation and the perpetrator should get a maximum sentence," Masango said.

Gauteng education spokesperson Steve Mabona said the teacher was removed from the school and would report to the district office in the meantime.

"A team of district officials, as well as the psychosocial unit, were dispatched to the school this morning [yesterday]," Mabona said.