DUT meets with SRC as protest flares up at another college 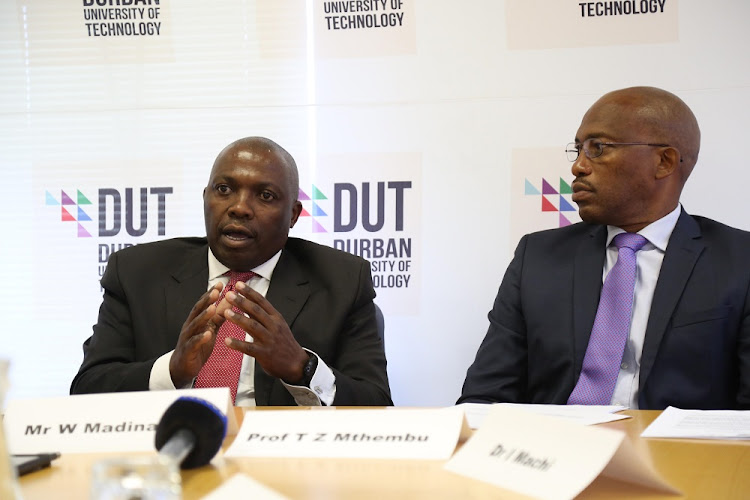 The troubled Durban University of Technology management is to meet with the EFF-led SRC on Thursday to discuss ways to resolve the volatile situation in the wake of the death of a student who was shot during a scuffle between protesting students and private security guards.

DUT senior director of corporate affairs Alan Khan said in a statement that access to all university campuses and registration centres would remain closed. He encouraged students who had not yet registered to use the university’s online registration system which was accessible through its website.

“DUT management would like to apologise to staff‚ students‚ parents and guardians for any inconvenience caused by the temporarily closure following the violent protests and the tragic events this week.

News of the death of a DUT student who was shot during a protest on Tuesday was broken to his family by his brother.
News
3 years ago

University management is working tirelessly around the clock trying to resolve the current state of affairs at the institution. The management team will be meeting the SRC today [Thursday] to discuss the current situation and to find a way forward‚” said Khan.

On Wednesday DUT vice-chancellor Thandwa Mthembu apologised for the death of third-year business management student Mlungisi Madonsela who was shot during a scuffle with members of the private security company Xcellent Security Services on Tuesday.

Two security guards linked to the fatal shooting were taken in for questioning by the police on Tuesday night and only released in the early hours of Wednesday.

Mthembu said the private security guards were hired to protect the university’s perimeter to protect students and staff from criminals as there had been a number of muggings.

EFFSC) has accused the DUT of being behind the killing of a student who died after being shot during a violent protest on Tuesday.
News
3 years ago

Mthembu said only six of the 250 security personnel carried guns. The university would also conduct its own parallel investigation to that of the police but Mthembu would not be drawn on whether the security contract with Xcellent would be reviewed in the wake of the fatal incident. However‚ he said if their investigation found the company to be at fault they would sever their ties with them.

Meanwhile‚ students from Thekwini TVET College's Asherville campus in Durban also protested on Thursday over accommodation. A group of about 200 students sang struggle songs near the campus on Thursday.

SRC president Sivuyile Mkungwana said they had presented a memorandum to the college rector and if they did not get a satisfactory answer by Friday‚ they would carry on with their protest.

A student has been killed after being shot at the Durban University of Technology's Steve Biko Campus on Tuesday.
News
3 years ago

Thekwini TVET College could not be immediately reached for comment.