Pupil stabbed at school over lover 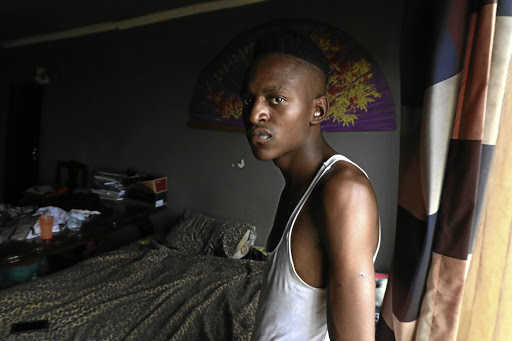 Justine Baloyi, who was allegedly stabbed by a fellow pupil in Soweto, says he will not forgive his attacker and wants him arrested. He has opened a case with police.
Image: Thulani Mbele

A grade 12 pupil at Diepdale Secondary School in Diepkloof, Soweto, was allegedly stabbed eight times by a fellow schoolmate following a fight over a girl.

Justine Baloyi, 20, said he was stabbed by a grade 11 pupil in front of teachers at the school gate on Friday.

"We were fighting over my girlfriend ... he called my girlfriend a day before the fight and told her that I was cheating on her," Baloyi said. "I met him on my way to class [on Friday] and he blocked my way. I then slapped him and we started fighting."

"One of the female teachers said: 'let them fight'. They separated us when I tried to throw him off the balcony."

A group of boys has been suspended after an alleged bullying incident at Selborne College in East London‚ in the Eastern Cape.
News
3 years ago

Baloyi said both of them were then taken to different staff rooms where teachers spoke to them. He said his attacker went home and returned with a knife.

"One of the teachers was walking me out of the gate after they told me to go home and cool off. The boy approached me and produced a knife," Baloyi said.

He said when the teacher realised that the pupil was armed, he stepped back.

"He stabbed me in front of him [the teacher]. Another teacher said he did not want to be injured," Baloyi said.

The teachers eventually stopped the fight and he was taken to the local clinic where his wounds were dressed, he said. "Nurses gave me an injection and told me to get a J88 form from the police station to open a case."

However, the parents of both pupils met at school and amicably resolved the matter. Baloyi's mother Lorraine said the attacker was remorseful and has apologised. "We spoke about the matter and we resolved it. The boy and his mother said they were sorry."

She said the attacker's mother also offered to pay for her son's medical expenses.

A Soweto teenager who took her own life after she was allegedly bullied by her teacher wrote a heartbreaking letter months before her suicide.
News
3 years ago

"My son is just stubborn and he will not listen to us as his elders," she said. "Reporting the matter to police and going to court is not going to help him. He needs to focus on his studies and move on. I will not support him in quarrels over girls."

Baloyi, however, refused to let the matter go. "I want justice. I am in pain and I will have scars all over my body. I want him arrested," he said.

Principal Molate Munakisi referred all questions to the education department, but spokesperson Steve Mabona said they will only comment once they have gathered all the facts.

Police spokesperson Captain Kay Makhubele confirmed that a case of assault with intent to do grievous bodily harm is being investigated. He said an arrest was imminent.