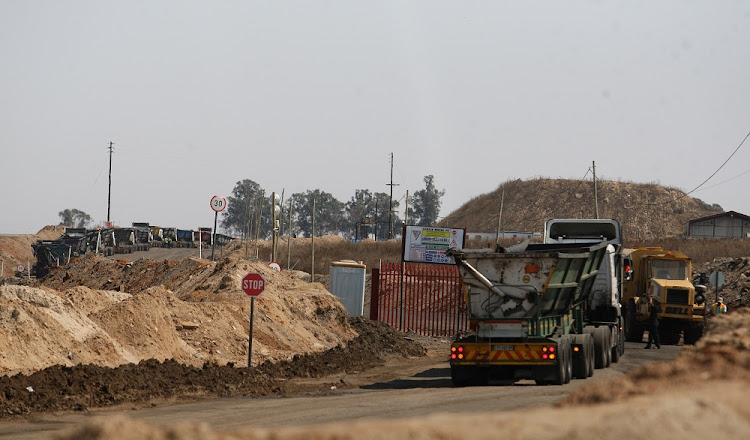 One of the Gupta-owned mines, like this one pictured, has exploded and left at least 20 people, who were allegedly stealing cables, trapped underground.
Image: SIMON MATHEBULA/Sunday Times

At least one person - believed to be an illegal miner - died on Wednesday in a gas explosion at the Gloria coal mine‚ near Middleburg in Mpumalanga‚ police said.

"Two people have been retrieved from the mine. One is dead and the other is alive‚ but rescue operations are still under way‚" said Brig Leonard Hlathi.

He said it was uncertain how many people were trapped underground and what condition they were in.

According to reports‚ more than 40 miners were underground when the explosion occurred. About 20 were reportedly able to escape.

Hlathi expressed concern over the incident‚ saying that people infiltrating mines - not only for gold and copper‚ but also for cables - was an ongoing problem.

The department of mineral resources said it was aware of the situation and believed that no official mining was under way at the mine.

Earlier‚ SowetanLIVE reported that a group of 42 people were attempting to steal cables from the underground operations at the Middelburg mine when the explosion occurred.

Twenty of them were able to reach safety‚ while the rest remained trapped.

The Gloria mine forms part of the Optimum Coal assets bought by the Gupta family in 2016. They were put into business rescue in February 2018. Business rescue is a provision of the Companies Act that allows for the rehabilitation of distressed companies.

The rescue process has‚ however‚ been hobbled by numerous delays‚ including 44 unsuccessful court bids.

More recently‚ the drafting of a revised business rescue plan was pushed back as last-minute bids for the assets came in‚ and Eskom‚ the largest creditor‚ has sought more time to meet the potential new owners and negotiate a coal-supply agreement for its Hendrina power station.

A warrant of arrest was issued for Atul and Rajesh Gupta.
News
4 years ago

Bouwer van Niekerk‚ attorney for the Optimum rescue practitioners‚ said the incident was a tragedy.

Van Niekerk said it is suspected that the gas that exploded was methane‚ the cause of many fatal explosions at coal mines.

The Optimum workers have not received their salaries since October and have not reported to work since early December. The Middelburg Observer newspaper reported that the mine had been struggling with cable theft.