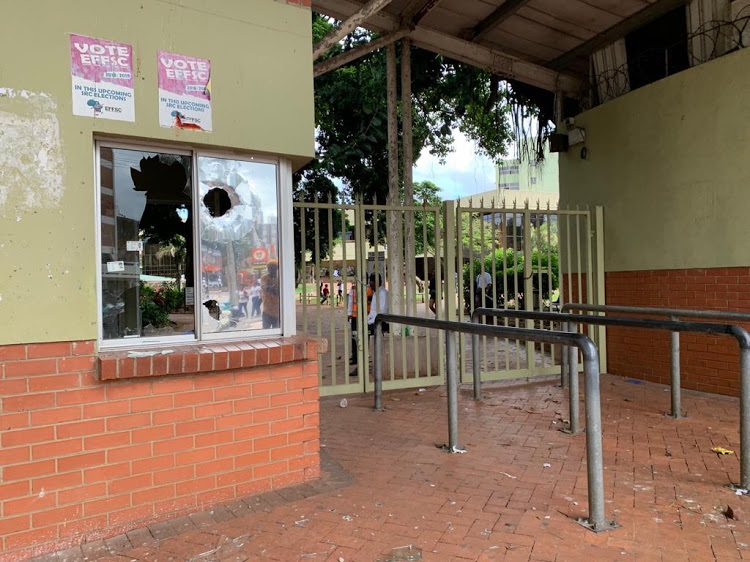 The news of third-year student Mlungisi Madonsela's death, who was shot dead during a scuffle between members of the EFF Students Command and security guards, was broken to his family by his brother.
Image: JACKIE CLAUSEN

News of the death of a Durban University of Technology (DUT) student who was shot during a protest on Tuesday was broken to his family by his brother before university management could officially inform them.

This was revealed by DUT vice-chancellor and principal Prof Thandwa Mthembu during a media briefing in Umhlanga on Wednesday in the wake of the violent student protest.

Third-year student Mlungisi Madonsela was shot dead during a scuffle between members of the EFF Students Command and security guards at DUT during ongoing protests in the province over accommodation‚ registration‚ funding and the insourcing of security and cleaning staff.

"The family perhaps got to know about this before we could officially let them know‚" said Mthembu.

"We understood that the matter had already been on Twitter and on Facebook‚ including the identity of Mlungisi‚ and that the family got to know through Mlungisi’s brother‚ who is reported to be a student at the Mangosuthu University of Technology.

EFFSC) has accused the DUT of being behind the killing of a student who died after being shot during a violent protest on Tuesday.
News
3 years ago

"We do understand that as a brother‚ he would probably have known almost immediately about what had happened to his brother. But we are sorry nevertheless that we were not the first to inform the family‚ as a result of social media and many other things."

Mthembu said the university made contact with his family once there had been confirmation that Madonsela had died.

"We had engagements with the family about where Mlungisi was and about the family having to do a proper identification of Mlungisi."

He said a team from the university’s student services department had been dispatched to Madonsela's home in Ingwavuma‚ in northern KZN‚ to assess the circumstances of the family and consider what type of support to offer them.

"We hope that by the end of the day they will come back with a report about that‚ for the university to then make an assessment of the level of support we could provide to the family‚" said Mthembu.

Meanwhile‚ acting KZN premier Sihle Zikalala led a discussion on protests at institutions of higher learning throughout the province during a regular sitting of the provincial executive council on Wednesday.

A student has been killed after being shot at the Durban University of Technology's Steve Biko Campus on Tuesday.
News
3 years ago

"As announced on Tuesday‚ before this unfortunate incident‚ a task team which includes MECs will meet student leaders‚ vice-chancellors and rectors in order to find a long-lasting solution. The executive council agreed today that this meeting should go ahead this Friday February 8 in Durban‚" said Zikalala.

"Judging by accounts of fellow students and ordinary members of society on social media and various platforms‚ it is clear that the whole province has been shaken by this tragedy. We call upon the people of KwaZulu-Natal to pray and support the family‚ students and management of institutions of higher learning during this period."