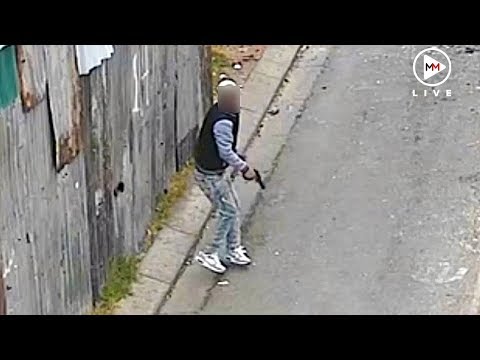 A mother of two put up a brave fight against robbers who wanted to invade her property.

Durban pre-school teacher and mother-of-two Kjersti Skanke's only instinct was to protect the five children on her property when armed men pounced on Saturday evening.

Speaking to SowetanLIVE a day after video footage of her daring fight against the robbers was widely circulated‚ an emotional Skanke on Tuesday said she had to keep the men at bay because she feared that they would flee with the children.

Three children‚ aged three‚ were strapped into their car seats when the men tried to enter the property in Pinetown.

Skanke came under fire on social media for repeatedly attempting to close the gate and "putting her child's life in jeopardy".

Three men were shot during an armed robbery at a business premises in Durban on Thursday.
News
3 years ago

"I am a pre-school teacher and a mother. My job is to protect children. People are saying that what I did was stupid and are asking why I didn't run. But at the time‚ my head wasn't telling me to run. It was telling me to protect the children‚" she said.

Skanke said family friends were leaving around 7.40pm when the incident occurred.

A pregnant mother and her daughter were in one car‚ while the two other children were in the other one.

Video footage of the incident shows Skanke manually closing the gate on the armed men before she is joined by her friend to help her.

However‚ shots are fired and her friend‚ the father of the three-year-old girl seated in one of the cars‚ falls to the ground.

Skanke did not give up and continued to keep the gunmen at bay until they fled.

"All I could think was what would happen if they entered the premises. I was trying to stall them so the children could run out of the vehicles but I also didn't want them to enter the property because I don't know what they wanted and I feared what they would do to the children‚" she said.

Skanke said the reality of the traumatic incident has hit her and she had been emotional since Saturday night.

Three arrested following recovery of items believed to have been stolen from schools in Alexandra, and Lenasia and Diepkloof in Soweto.
News
3 years ago

She said no one was injured because the men fired shots into the air.

She said people who viewed the video questioned why the dogs did not attack the robbers.

"The dogs are not guard dogs. They are rescues."

On Facebook‚ Skanke's father Sven praised his daughter for her "parental instinct".

"My daughter has walked a path in her years‚ has experienced a hijacking at 12 years old‚ a gun to her head‚ has lost her brother. Her first born had leukemia‚ her second colon issues. She will naturally do everything for her children‚ and those of others. Hero? No‚ usually heroes die‚ she did what she thought right at the time to protect all‚" he wrote.

"Nobody was injured. A case of robbery was opened at Pinetown police station‚" Mbele said.