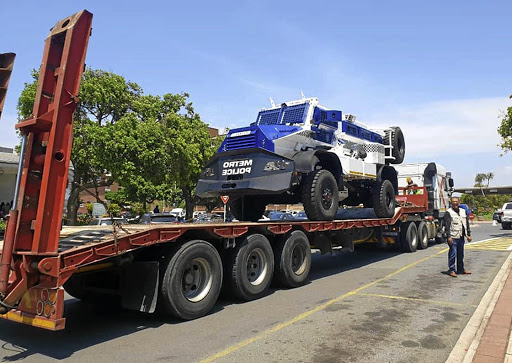 Armoured vehicles for the metro police.

The group, whose actions have often brought them into open conflict with police, the ANC and eThekwini municipality, described the arrival of three of the four Casspirs as "disgraceful".

"We should only see casspirs in the Apartheid Museum. The decision to bring them back to use them against protests and land occupations is disgraceful," Abahlali said in a statement yesterday.

The movement has accused the ANC of mobilising "all kinds of violence against us in Durban using izinkabi [hitmen], the anti-land invasion unit, municipal security guards and two police forces".

Durban police are investigating malicious damage to property after an eThekwini municipal truck was petrol bombed in Umlazi on Friday.
News
3 years ago

It said its members and other people engaged in protest were regularly wounded, maimed and killed.

"If the ANC had any real progressive commitments they would see protests as a democratic question and engage them as an opportunity for discussion. They would see the land question as a question of justice, understand land occupations as land reform from below and work to put the social value of land before its commercial value."

Abahlali said instead of engaging them, the ANC wanted to respond to their systemic exclusion and impoverishment with military force, using the same tools as the apartheid state.

The purchase of the four Casspirs - the first armoured vehicles to be used by metro police in the country - caused a huge outcry because they were commissioned without a formal tender, at a cost of R20m in 2017.

But the eThekwini municipality defended its decision after inquiries from TimesLIVE about why it had bypassed tender processes to acquire the vehicles.

400 days later... Durban waiting to hear what mayor has done in 365 days in office

A war of words has broken out between Durban mayor Zandile Gumede and the DA in the eThekwini Municipality over the latter’s failure to give a ...
News
4 years ago

Municipal spokesperson Msawakhe Mayisela said: "The city can buy from a state entity using section 57 of our supply chain management policy, read with section 110 of the Municipal Finance Management Act."

The city's deputy mayor, Fawzia Peer, said the Casspirs had been a long time coming and the vehicles would help safeguard metro police during volatile situations.

But Abahlali was not pleased.

"They were first used in the wars in Namibia and Angola, and then used against the uprising against apartheid in the townships," said Abahlali.

Abahlali is embroiled in court battles with the eThekwini municipality over land occupations, which have often turned violent.