ANC man Thabang Setona gets 12 months, suspended, for that kick 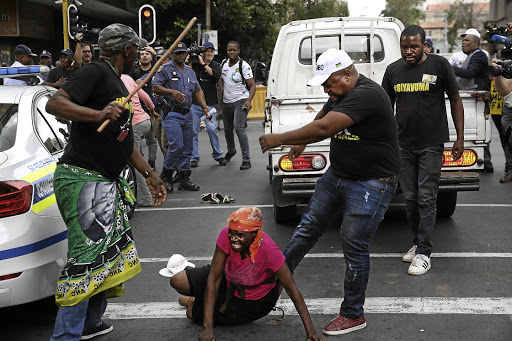 Convicted ANC member Thabang Setona visited the home of his victim twice last year as he tried to beg for forgiveness for assaulting Olivia Makete.

Setona, 36, was sentenced to 12 months suspended for five years by the Johannesburg magistrate's court on January 29, for assaulting Makete during a march at ANC headquarters early
last year.

He was found guilty of assault with intent to cause grievous bodily harm.

Makete's husband, Robert Makete told Sowetan yesterday Setona came twice to apologise and even gave them "something" to express his remorse in November.

"It was his father that came first into our home because he was not sure how we would react. We asked him 'why did you leave the person who committed the crime'. He then called him and Setona joined him here and they apologised," said Robert.

Thabang Setona has been sentenced to 12 months' imprisonment for assaulting a woman.
News
2 years ago

Setona visited the family again in Orange Farm Extension 10, south of Johannesburg, with his brother, sister and mother.

It was in this second meeting that Setona offered them "something".

Both Olivia and her husband would neither deny nor confirm that the offer made to them was monetary.

Setona was captured on video and in photographs, kicking 52-year-old Olivia during a Black First Land First march to Luthuli House in February las year.

Setona and other ANC members attacked Olivia who was not part of the march but was in the CBD to register a complaint about lack of electricity and water in their informal settlement.

She suffered several injuries and struggled to walk after being kicked and hit with a stick.

"I have forgiven Thabang with all my heart. He came twice here to apologise and I accepted his apology.

"My family also accepted his apology, and we have forgiven him. I would not be happy if he had gone to jail,"
said Olivia.

Assault victim did not march for Zuma - 'BLF said it was for water, power'

All Nkateko Olivia Makete, 52, wanted when she went to Luthuli House on Monday was to register her grievance about lack of electricity and water in a ...
News
3 years ago

However, the mother of four said things have been tough since the assault.

She made a living by selling chicken feet and intestines. She has since been forced to quit as she can no longer walk long distances.

"I cannot lie to you, my bones still ache but I forgive him," she said.

Her right eye, which was also hurt during the assault, has not recovered fully. She said she was still taking pain killers to help with pains in her body.

Her husband now has to do some of the duties that Olivia used to do before the assault.

Robert fetches water and their son does the laundry.

"While comrade Thabo [Thabang] will not be going to jail to serve a sentence; the ANC will resuscitate its internal disciplinary processes to deal with his conduct.

"We appreciate that he handed himself over to the police and has pleaded guilty. In addition, we welcome the fact that he has, since the day of the incident, shown remorse and apologised to the victim," the party said in an official statement.

Will ANC women beater get his day in court?

While ANC Johannesburg branch secretary Thabiso Setona had handed himself over at the Johannesburg central police station after he was filmed ...
News
3 years ago

Olivia Makete struggled to walk when she woke up on Tuesday‚ still in agony after being kicked by ANC members “defending” Luthuli House.
News
3 years ago
Next Article