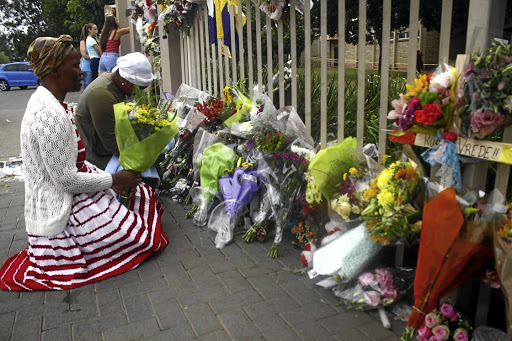 Members of the community lay flowers at the gate of Driehoek school, where four children have died after a walkway collapse.
Image: KABELO MOKOENA

Another pupil has died in hospital following a tragic incident of a walkway bridge collapsing on top of pupils at the Hoërskool Driehoek in Vanderbijlpark last week.

The pupil was in ICU when he succumbed to his injuries on Saturday night. At least four pupils have now been confirmed dead from the tragedy.

"The Gauteng education MEC Panyaza Lesufi is saddened by the passing away of another child from the Hoërskool Driehoek tragedy, that occurred on Friday. The fourth child died last night [Saturday], at a local hospital," said department spokesperson Steve Mabona.

"His condition was worrisome, as he went in and out of theatre on several occasions. Unfortunately, he succumbed to serious injuries. The school leadership will visit the family this morning [yesterday]."

A fourth pupil has died in hospital following the walkway bridge collapse incident at the Hoerskool Driehoek.
News
3 years ago

The pathway bridge collapsed on Friday morning, killing three pupils and leaving over 20 others injured.

Pupils were heading towards their classrooms after the morning assembly when the concrete bridge, that connects the administration block and the classrooms, collapsed on them.

The latest victim has been identified as Marnus Nagel. The three other victims who died on the scene are Rayden Olckers, 17, and Marli Carli and Jandre Steyn who are both 13 years old.

Lesufi arrived at the school accompanied by Emfuleni mayor Reverend Gift Moerane, police and other religious leaders to lend support.

He announced that the school would remain closed until it was declared safe for teaching and learning to resume.

The department said that three pupils had been discharged from hospital while others were still receiving medical attention.

Hoërskool Driehoek was built 45 years ago and currently enrols about 1,060 pupils.

An inquest docket has been opened by the police while the department of labour investigates the integrity of the school's infrastructure.

The Gauteng department of education said it would appoint its own team of structural engineers to look into the entire structure of the bridge.

Three pupils were killed after a walkway collapsed at Hoerskool Driehoek in Vanderbijlpark on February 1 2019. About 15 were injured and five of them are in a critical condition. The pupils were returning to class after assembly when the walkway suddenly collapsed.