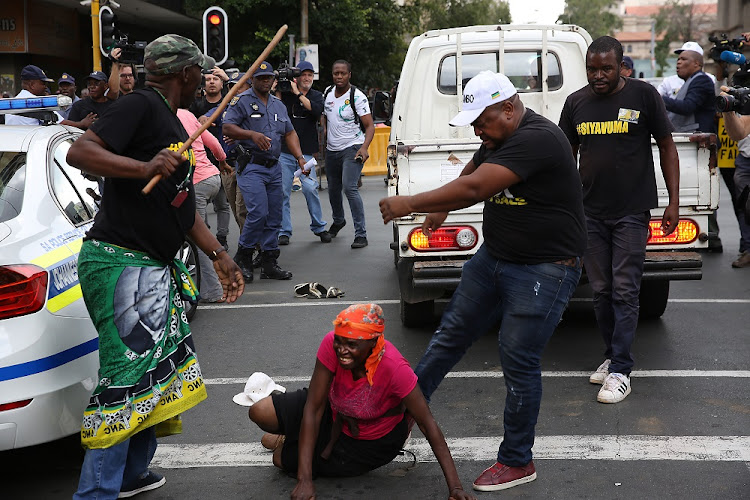 ANC Johannesburg branch secretary Thabang Setona has been sentenced to 12 months' imprisonment for assaulting a woman during a march at the party's headquarters early last year.

Matona was found guilty of assault with intent to cause grievous bodily harm and has been sentenced to direct imprisonment without the option of a fine.

He was captured, both on video and in photos, kicking 52-year-old Olivia Makete during a Black First Land First (BLF) march to Luthuli House in February last year.

Olivia Makete struggled to walk when she woke up on Tuesday‚ still in agony after being kicked by ANC members “defending” Luthuli House.
News
3 years ago

Setona and other ANC officials attacked Makete, who was not part of the march but was in the CBD to register a complaint about lack of electricity and water in a newly formed informal settlement in Orange Farm, south of Johannesburg.

She suffered several injuries and struggled to walk after being kicked in the rib cage area and hit with a stick.

The police have confirmed that Setona, 36, will spend a year in prison.

"[The] good conviction is the result of diligent work done by an investigating officer. We hope this sentence will scare away would-be offenders from committing the same crime. No person has a right to assault another person," read a statement from the Johannesburg Central police station.

It took donations from Americans‚ Canadians and locals to raise money to buy a decent structure for Olivia Mokete.
News
3 years ago

Will ANC women beater get his day in court?

While ANC Johannesburg branch secretary Thabiso Setona had handed himself over at the Johannesburg central police station after he was filmed ...
News
3 years ago

Assault victim did not march for Zuma - 'BLF said it was for water, power'

All Nkateko Olivia Makete, 52, wanted when she went to Luthuli House on Monday was to register her grievance about lack of electricity and water in a ...
News
3 years ago

Robert Makete‚ 59‚ tried to explain how the handing over of memorandum resulted in him and Olivia Makete‚ 52‚ being kicked.
News
3 years ago
Next Article