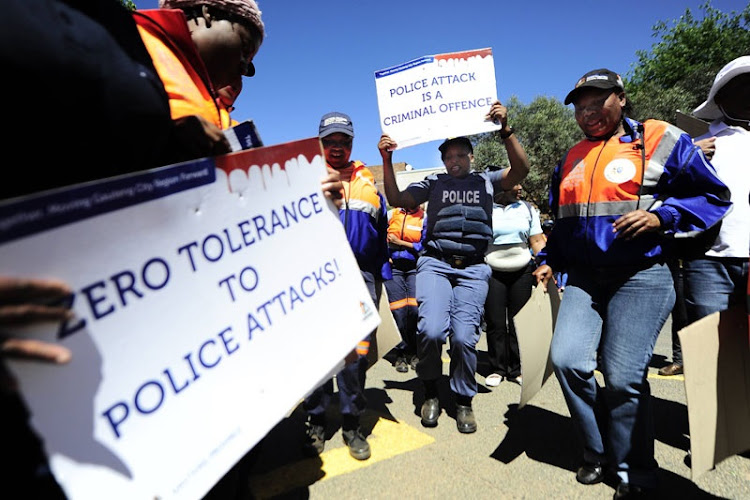 Parliament has called for greater protection of police officers after a fatal shootout with a suspected cash heist gang in northern KwaZulu-Natal on Friday.

Two police officers were killed and another injured when they confronted the gang on the Hlabisa road near Nongoma. Seven gang members were killed in the exchange of gunfire.

Chairman of parliament's police portfolio commission Francois Beukman said: “The SAPS lost highly-trained members who were at the forefront in the fight against violent crime. It is a big loss to our nation. Their deaths is a huge loss to SAPS‚ the specialised units and their respective families.

"The committee extends its heartfelt condolences to the next-of-kin and families of the fallen police members. They paid the highest price to ensure that ordinary South Africans do not become the victims of brazen criminality."

A bloody shootout between police and a gang of alleged cash-in-transit robbers left nine people dead - including two policemen.
News
3 years ago

Beukman said in a statement that the incident showed that more resources needed to be allocated to the specialised police units who need to deal with highly-trained and heavy-armed cash-in-transit robbers and other high risk operations.

“The specialised units of the SAPS face life-threatening and dangerous situations daily‚ and all necessary steps should be taken from a budgetary‚ logistical and training perspective to support them appropriately‚” he said.

He added that the committee would support an increase in the budget for the SAPS' specialised interventions sub-programme - which was allocated R4.3bn in the current financial year.

"The increase in unconventional crime incidents with heavily-armed perpetrators requires a re-look at modus operandi and resource allocation‚" said Beukman.

Police are national assets, killing them is an attack on the state: Bheki Cele

Two police officers were murdered on Thursday, one in the Free State and another in the Western Cape.
News
3 years ago

A senior Sedibeng traffic officer has been shot dead at his home during a suspected house robbery in which his wife was wounded.
News
3 years ago

Parliament condemns killing of police officer in the Free State

Parliament’s portfolio committee on police has condemned the murder of a police officer in Koffiefontein, Free State.
News
3 years ago
Next Article