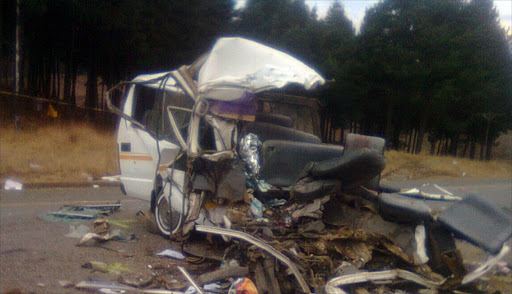 A taxi, similar to this one in the file picture, was involved in the accident.
Image: Arrive

A minibus taxi laden with passengers somersaulted several times before crashing into a house north of Durban on Friday.

The accident‚ which occurred in Amaoti near Inanda‚ claimed the life of a 25-year-old man. Six others‚ including a six-year-old‚ were injured.

Crisis medical spokesperson Kyle van Reenen said emergency services were "met with the twisted frame of a Toyota Hi-Ace which had rolled several times down an embankment‚ before coming to a rest against a house".

Thirteen die in horror crash on the R49 in North West

The death toll has risen to 13 following a horror crash, when a driver of a bakkie overtook a number of cars on a solid white line and collided ...
News
3 years ago

Van Reenen said the man died at the scene of the accident.

The injured were treated and taken to hospital.

"The cause of the collision and the details surrounding it are unclear and will be investigated‚" he said.