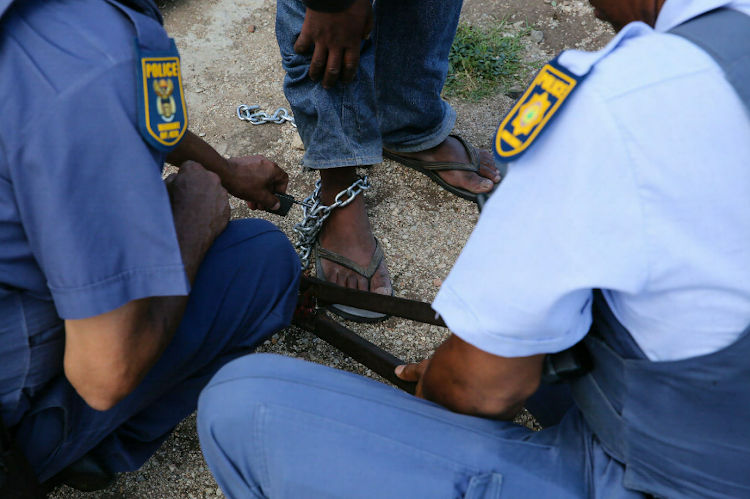 Police free a young man who was chained at St John’s Church in Motherwell, Eastern Cape, because of his alleged drug addiction and violent tendencies.
Image: Werner Hills

"Jesus of Nazareth get these devils out of here‚" a group of women screamed as they threw warm "holy" water on police using bolt cutters to free a young man from the chains church members had allegedly used to tether him to a tyre.

This bizarre scene played out in the yard of St John's Church in Motherwell in the Eastern Cape shortly after a HeraldLIVE team stumbled upon the 20-year-old man in chains.

Police efforts later to free Songezo Ntiyantiya from his chains took a rather comical turn when a handful of women – some still in their church gear – pitched up with buckets of warm water‚ which they flung at "the devils and intruders".

FACTIONS within the St Johns Apostolic Faith Mission Church in Katlehong in Ekurhuleni are hauling each other to the Johannesburg High Court. This is ...
News
10 years ago

The church members claimed he had been put in chains because he was a drug addict with violent tendencies. One church official said: "He is a clever guy‚ but when he smokes he gets violent and breaks everything in the house."

Ntiyantiya‚ who said he had been taken to the church on Saturday by his father to be "cured"‚ said he no longer smoked drugs and just wanted to go back to his studies.

Read the full story on HeraldLIVE.