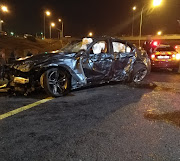 Image: TWITTER/@LimaCharlie1 A car crashing on a Cape Town highway at high speed was caught on camera.

A passenger may have been in the car when Taufiq Carr crashed his BMW M3 on the N1 in Cape Town a week ago.

Carr's BMW crashed into the centre median on the N1 near Century City.

A video being circulated on social media appears to have been taken from the passenger side of the car on the night of the crash.

The video clip shows the BMW speeding alongside a second car, which looked like a white BMW.

Footage from Inside the BMW that Crashed in Cape Town... Whatsapp your Videos: 062 615 2029 #duc #videos For Business Adverts, Viral Videos and Business Memes, contact Admin.

A few seconds into the video, a motorbike comes speeding through between the two cars.

The second car starts closing the gap when the video starts shaking and a man is heard saying: "Ay".

Sparks appear on the screen before the video ends. The 26-year-old businessman Carr from Mitchells Plain has since had both of his legs amputated.

Mayoral committee member for safety and security JP Smith said in a video after the crash, someone was heard asking for "Imraan". 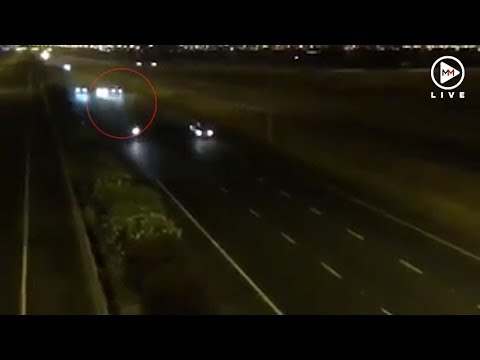 "If there was a guy called Imraan in that car, he escaped that accident miraculously. I am sure he has used all his nine lives," Smith told SowetanLIVE on Tuesday evening.

Smith said the fact that the person behind the recording had left the scene, would save him from being criminally prosecuted.

"I hoped he has learnt his lesson and would not go back to his foolish and reckless ways."

Despite the horrific crash, Smith said a few nights later, petrol heads were back racing on the freeway.

"It doesn't help what we do, people just don't want to learn."

This was an attempt to see if it could include impounding or forfeiture when petrol heads are caught driving recklessly.

He said they were still getting legal advice on whether they could add it to their own by-law.