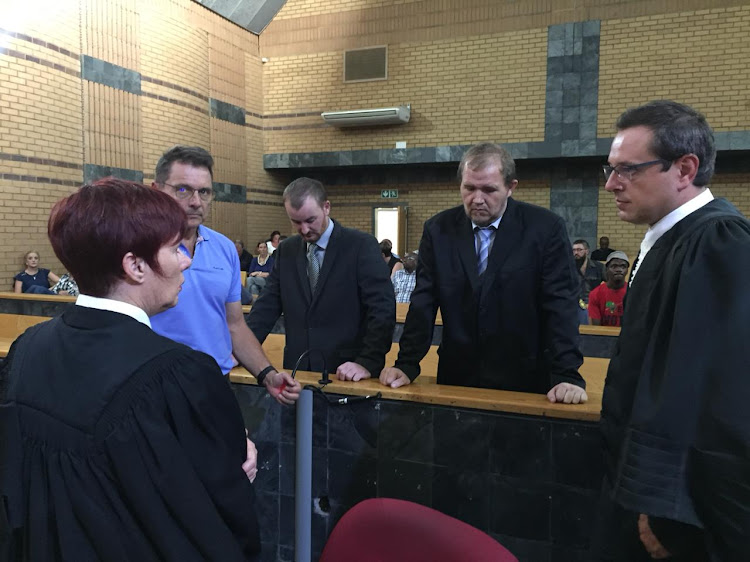 An emotional mother of the Coligny teen who died in the farming town last year broke down in tears while testifying on Tuesday afternoon.

Agnes Moshoeu was testifying in aggravation proceedings in the sentencing of Pieter Doorewaard and Phillip Schutte who have been convicted of her son's murder.

Moshoeu told the court that she is a mother of six children. Sixteen-year-old Matlhomola Moshoeu was her seventh child. He was a grade 6 pupil at the time of his death.

Three witnesses are expected to testify ahead of sentencing procedures at the North West high court on Monday.
News
2 years ago

Doorewaard and Schutte were convicted in October 2018 of murdering the boy. They were also found guilty of his kidnapping, and of intimidation, theft and pointing a firearm, after a lengthy trial.

The incident happened on April 20 2017. The 16-year-old was believed to have been thrown out of a moving bakkie.

State prosecutor advocate Rapula Molefe asked the mother how she felt when she had received the news of her boy's killing.

Molefe put it to her that evidence in court showed that he had died for stealing a sunflower.

"I don't have an answer to that, I am not sure because I was not there."

Molefe asked: "How do you feel that it has been established that your child has died for stealing a sunflower?"

"I am not happy about that," she replied.

Molefe asked was it "really necessary" for a child to die for a sunflower?

Phillip Schutte and Pieter Doorewaard, were convicted  in October last year in connection with Matlhomola Mosweu's murder
News
2 years ago

After being asked what impact the death of Matlhomola had had on her as a parent, the soft-spoken woman broke down and court proceedings had to be stopped.

"I can see the witness is emotional, is it a convenient time to take the adjournment?" judge Ronald Hendricks asked.

Hendricks remanded the matter to Wednesday.

Earlier on Tuesday, a spiritual leader and former mayor of Coligny, David Celo, told the court that the outcome of the case would determine what would happen to the farming town.

During cross-examination led by Pieter Smit, acting for Schutte, Celo was asked what the current situation in Coligny was.

"Is it still volatile?" Smit asked.

Celo said the situation in the town was calm, but it all depended on what happened in the case.

"I can say right now that the situation in Coligny is calm, but it is not completely calm. The community is monitoring the outcome of this case."

Call for Coligny duo to be jailed for life

Life imprisonment will be a suitable sentence for two farm workers who were found guilty of killing Matlhomola Mosweu.
News
2 years ago

Smit asked: "Could we have the same situation if a portion of the community is not happy with the outcome of this case?"

"According to the situation, there is going to be worse than what has happened, if they are not satisfied with outcome," Celo replied.

Earlier, Celo told the court that life imprisonment was an appropriate sentence for the two men.

He was the second state witness who had asked for life imprisonment. On Monday, first state witness and local principal Stanley Mnyakama had also asked for the same sentence to be imposed.

Smit asked Celo if he would also resort to violence should a life sentence not be imposed.

"I am not like other people, I am a pastor, I would not join people. I will leave here unsatisfied if they are given less than a life sentence," he said.

He said there were different political leaders who had also played a big role in the community.