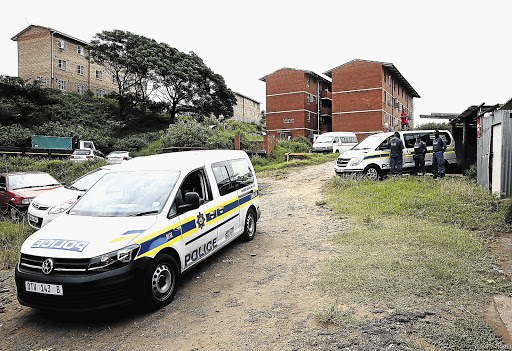 Residents and community activists at the violence-prone Glebelands hostel in Durban have called for the intervention of the UN.
Image: THULI DLAMINI

Confusion marred the start of the trial of eight men, including a police officer, accused of being behind a spate of killings at the notorious Glebelands Hostel in Durban.

An attorney representing three of the men withdrew his services because they did not have enough money to pay legal heavyweight advocate Jimmy Howse.

This came as reports also surfaced that two men were killed at the hostel on Sunday night.

Human rights and community activist Vanessa Burger said residents reported hearing gunshots from the old block at the hostel at around 8pm.

"It was later confirmed that two men have been killed. One man was a resident of Block 50, the other was from Block 51," Burger said.

Just before the start of the trial in the Pietermaritzburg High Court yesterday, Durban lawyer Andile Dakale told judge Jerome Mnguni that he was withdrawing his services for accused No1 Bhekukwazi Mdweshu, 37; accused No4 Eugene Hlophe, 30; and accused No5 Ncomekile Ntshangase, 34, because they were not able to raise the funds required by Howse.

Glebelands murder trial delayed on day one over advocate's pay

Confusion marred the start of the trial of eight men, including a police officer, accused of being behind a spate of killings at the notorious ...
News
3 years ago

Dakale told the court that he, as an instructing attorney, had been advised by Howse, who was not present, to advise the court about the situation.

He said that on Friday, he was advised that attorney Roy Singh would be representing the accused "as instructed by the family".

Judge Jerome Mnguni did not take kindly to the sudden turn of events as the trial had been set down for yesterday.

He asked if Dakale had consulted the accused about the withdrawal of services.

But when the accused were told about Dakale's withdrawal of his services, they disagreed and suggested he continued representing them. Mnguni was forced to stand the matter down until tomorrow for the parties to resolve the problem.

"You see, I will make things easier for you. I will stand the matter down so that you can sort out this thing. So, you must come back on Wednesday so that we can resolve this thing," he said.

There was a heavy police presence in and outside the court because of the serious charges, which include murder, attempted murder, unlawful possession of ammunition and firearms, and racketeering.

Accused No 1 Mdweshu was employed as a detective constable in the Durban Central detective branch before his arrest.