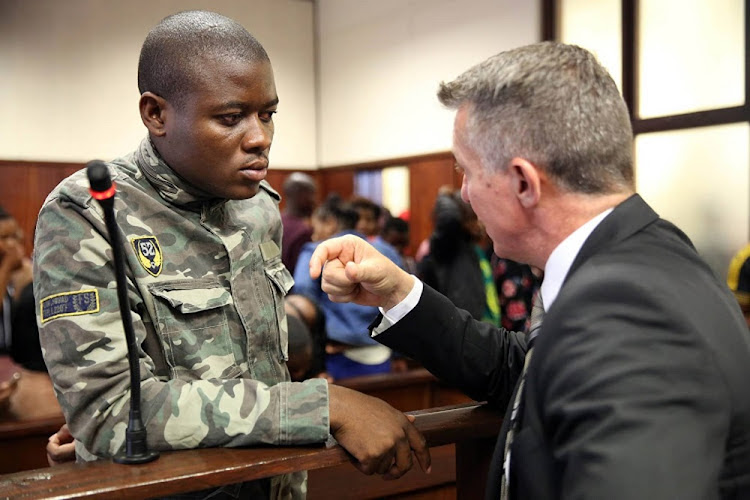 Yesterday, Khanyile was sentenced to three years' house arrest and ordered to submit himself to rehabilitation programmes.

Dressed in a Steve Biko T-shirt and a camouflage jacket, Khanyile faced magistrate Siphiwe Hlope as he handed down sentence in the Durban magistrate's court.

Khanyile was convicted on charges of public violence, failing to comply with a police instruction and possession of a dangerous weapon in August.

Hlope also ordered Khanyile to pay a R5,000 fine or serve a three-year prison sentence, suspended for five years. He was also instructed by the court to do community service every month and refrain from taking intoxicating substances.

Hlope told the court, packed with Khanyile's supporters and the media, that he was a "proper case for correctional supervision".

"The court is of the view that the accused is a person who should be given the opportunity to take responsibility for his behaviour."

Hlope said that, as a father of three, Khanyile must be given the chance to make proper decisions for the future of his children. Before the sentence was delivered, Col Langa Mhlongo, who heads the cluster command for Durban Central, told the court that 43 cases of public violence, including #FeesMustFall-related cases and service delivery protests, were registered in three to four months in 2016.

In just one week, during the height of the protests in 2016, R361,000 was spent on accommodation and overtime, the court heard.

Student activists who participated in an historic walk from KZNl to Gauteng are planning to hand over a memorandum to President Ramaphosa.
News
3 years ago

"We were caught unaware at great expense to the state."

Mhlongo described Khanyile as "rude, arrogant and unco-operative". He said he also had reliable information that Khanyile had threatened investigators and prosecutors.

He said he did not regard Khanyile as remorseful, even after he pleaded guilty.

Mhlongo added that while the #FeesMustFall cause may have been genuine, Khanyile had led people astray.

Defence advocate Danie Combrink, during cross-examination, told Mhlongo that a professional social worker who assessed Khanyile had found him to be genuinely remorseful. He said public violence cases were related to service delivery protests rather than student protests.

In mitigation of sentence, Combrink asked for correctional supervision for Khanyile. The court heard that Khanyile had been accepted to study for a master's degree in public management at the University of KwaZulu-Natal.