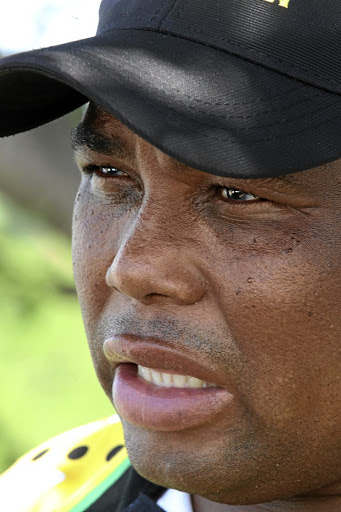 Steve Mashabela says he has been receiving calls demanding that he drop the case.
Image: ANTONIO MUCHAVE

A Limpopo pastor and another man appeared in a local magistrate's court on Friday for allegedly trying to burn the man of the cloth's love rival.

Pastor Peter Mongadi, 37, of the True Nation Apostolic Ministry and his accomplice, Oupa Mapoulo, are accused of kidnapping an ANC ward councillor in the Polokwane City Municipality from his girlfriend's home.

They allegedly locked him inside his car before setting it alight in 2016.

The case was provisionally withdrawn against the accused after the state was not ready with the trial.

But in November, the National Prosecuting Authority (NPA) ordered the charges to be reinstated.

The man who was attacked, Steven Mashabela, welcomed the latest development.

"I fought tirelessly for this case to be reinstated... I had to write to the NPA to look into the matter and I'm glad they did because I have overwhelming evidence that my ex-girlfriend and the pastor wanted me dead," he said.

Mashabela said he had learnt of the romantic relationship between the pastor and his girlfriend of six years just before the arrest, but never thought he could be a suspect.

"When the two men opened the room where my girlfriend was renting, what was worrying is that they didn't force the door open, they had a key.

"They kidnapped both of us and drove in my blue VW Polo.

"Along the way they dropped my girlfriend in a secluded area in Seshego. They then drove further with my hands tied from the back. I was seated in the back seat."

Mashabela said the pair stopped the car at GaChuene village outside Polokwane. "When we arrived at the village, the two men poured petrol, locked the door and set it alight.

A voice recording said to be that of Limpopo premier Stan Mathabatha declaring love to his provincial deputy in the ANC has emerged.
News
3 years ago

"As the car was burning, I managed to kick the door and it opened. I immediately went to the police to open case at 2am," he said.

Mashabela said when the two were arrested, he felt betrayed by the mother of his one-year-old daughter.

"We have been dating for six years with the mother of my child. And her lover decided to kill me. I still don't know why they would go to a point of killing me," he said

Mashabela said he had received phone calls and messages demanding that he must withdraw the case against the two.

However, Mongadi and Mapoulo's lawyer, advocate Jerry Koma said Mashabela had no case against his clients.

"The case was withdrawn because there was no evidence linking my clients to this case. Mashabela is just putting pressure on the authority to reinstate the charges, but there is no new evidence or witness brought forward."

Reality show goes behind the scenes.
News
3 years ago

He said Mashabela was jealous as Mongadi has a baby, who Mashabela claims to have fathered, with the woman.

Ngoepe said the case was postponed to next month for further investigation.

"The victim has recently opened another case of intimidation after he received threatening messages forcing him to withdraw the case."

Mongadi is said to have formed his church four years ago after he broke away from a Gauteng branch.

"We attended the same church in Tembisa about four years ago and he left to form his own. I heard he has got branches in Mankweng and GaKgapane," said a former fellow worshipper, who asked not to be named.

The pastor is also known for delivering sermons on Thobela FM on Sundays.

A Limpopo mother whose daughter was allegedly raped by a local pastor wants him to rot in jail.
News
3 years ago

Ignorance is the opium of the masses, a breeding ground for quackery of all sorts

It is time black people declare unquestioning practices and groupthink as 'enemy number one' of humankind.
Opinion
3 years ago

Pastor Banda has clients up in arms.
Opinion
3 years ago

Limpopo's "Prophet of Doom" Lethebo Rabalago, 25, who sprayed insecticide on his congregants during sermons, was yesterday sentenced to four years ...
News
3 years ago
Next Article