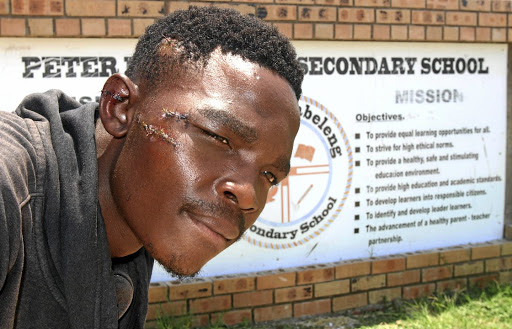 A grade 11 pupil at a Limpopo school needed stitches to his face after he was allegedly assaulted by a teacher for bringing a soft drink inside a classroom.

Tokelo Mamabolo, 20, was allegedly drinking the soft drink during class when the teacher attacked him for disturbing his lesson.

The alleged incident took place at Peter Nchabeleng high school in Seshego on Tuesday morning after Mamabolo had arrived late in the classroom.

Mamabolo said he was punched several times and his face was pushed towards a broken window, leaving him with gushing wounds on his head, right cheek and ear.

Mamabolo told Sowetan yesterday he felt dizzy as a result of excessive bleeding after the incident.

A pupil from a mentally challenged school in Soweto will not be suspended after he was filmed throwing a brick at a teacher.
News
2 years ago

"I didn't understand why the teacher was so brutal," he said.

Mamabolo confirmed that he had arrived late for class after manning the school's gate to monitor latecomers.

"My sin was to get in with a bottle of soft drink," he said.

When Sowetan visited him yesterday, he still had stitches on the head, right ear, cheek and side of the eye, and said his teeth were loose.

"Being beaten in front of my classmates for no apparent reason was so embarrassing. I want measures to be taken against the teacher," he said.

Mamabolo said after the incident the teacher identified as Mahlatse Mokgehle, allegedly tried to bribe him with money to buy his silence.

"I refused to take his money and told him I wanted to consult with my parents first," he said.

His mother, Georginah Mamabolo, said the teacher had shown no remorse for attacking her son.

"We tried to engage the teacher but he was unremorseful, hence we ended up opening a case with the police because the attack was just a display of brutality," she said.

The SA Democratic Teachers Union (Sadtu) in KwaZulu-Natal has blamed the escalation in attacks on teachers by pupils on a call by the Congress of SA ...
News
2 years ago

Approached yesterday, Mokgehle denied having assaulted Mamabolo but said they argued over a bottle of soft drink.

"I was busy teaching when he arrived and disturbed me. After the commotion I took the initiative to take the pupil to the doctor for treatment," Mokgehle said.

However, Mamabolo denied that it was Mokgehle who took him to the doctor but said it was the principal.

Secretary of the school's governing body, Maria Chikana, condemned the incident and said they would want the teacher to explain what happened.

Police spokesperson Colonel Moatshe Ngoepe confirmed yesterday a case of assault had been opened against the teacher.

Spokesperson for the provincial department of education Sam Makondo said it had not received a report about the incident.

"As the department we take the matter seriously because the administration of corporal punishment is breaking the law and there has to be consequences," said Makondo.

The department of education has confirmed that one of its teachers is facing trial on an assault with intent to cause grievous bodily harm charge.
News
2 years ago

The disgusting scourge of pupils assaulting and stabbing teachers must be nipped in the bud.
Opinion
2 years ago

A mathematics teacher who allegedly assaulted almost 20 pupils at Sol Plaatjie Secondary School in Mahikeng, North West, has been expelled.
News
2 years ago
Next Article