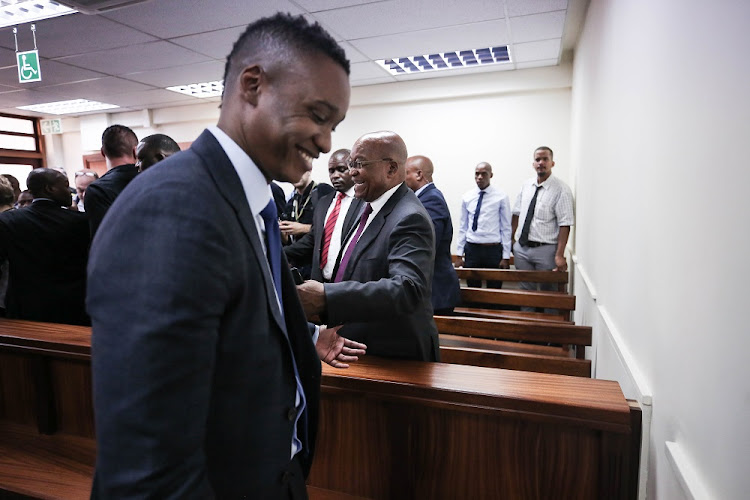 Corruption charges against Duduzane Zuma were halted in the Johannesburg Specialised Commercial Crime Court on Thursday to allow a key witness to finish giving testimony at the Zondo inquiry into state capture.

"The reason this matter is provisionally withdrawn is to allow one of our key witnesses to conclude leading evidence at the state capture inquiry and it has also been indicated that such a witness might be cross-examined by Mr Zuma," National Prosecuting Authority (NPA) spokesperson Phindi Mjonondwane Aldo said on Thursday.

Zuma, son of former president Jacob Zuma, was charged in July 2018 with corruption, alternatively conspiracy to commit corruption, relating to an alleged R600m bribe offer made to former deputy finance minister Mcebisi Jonas in 2015 by a Gupta brother in his presence.

The NPA denied that it had been ill-prepared or that the provisional withdrawal had been granted because Duduzane was the former president’s son.

The Gupta brother, whom Jonas had identified as either Rajesh or Ajay, had allegedly offered Jonas the position of finance minister at the family’s Saxonwold compound in exchange for furthering the family’s business interests.

Zuma and the Guptas deny Jonas's claims. They say he met Zuma and former arms deal adviser Fana Hlongwane over rumours that Hlongwane was blackmailing him. Jonas is expected to be cross-examined about this encounter at the commission.

Former president Jacob Zuma’s son Duduzane appeared before the Randburg magistrate's court on a culpable homicide charge on January 24 2018, after which he was due in the Specialised Commercial Crime Court, where corruption charges against him were provisionally withdrawn.