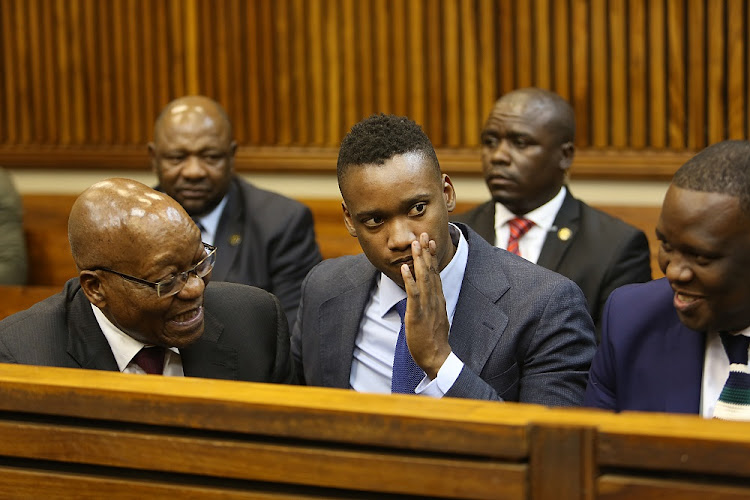 Duduzane Zuma was supported by his father, Jacob Zuma at the Randburg magistrate's court, Johannesburg, on January 24 2018, where he is facing charges of culpable homicide.
Image: Alon Skuy

The culpable homicide case against Duduzane Zuma‚ the son of former president Jacob Zuma‚ was quickly postponed in the Randburg Magistrate’s Court on Thursday.

Father and son sat alongside each other in court‚ appearing relaxed as they chuckled and joked‚ looking through Zuma senior’s phone.

Dressed in a grey suit‚ light-blue shirt and dark-blue tie‚ Duduzane then took his place at the front of the court‚ where his lawyer revealed that they had concluded all their preparations ahead of his culpable homicide trial‚ which has been set down for March 26.

The 34-year-old Zuma faces two charges of culpable homicide and a count of negligent driving. The charges are linked to an incident in February 2014‚ when his Porsche collided with a minibus taxi near Sandton‚ killing two taxi passengers.

The National Prosecuting Authority is understood to have sent a letter to Duduzane Zuma’s lawyers, notifying them of the provisional withdrawal of ...
News
3 years ago

An inquest was held in 2015. A magistrate found that Zuma should stand trial for the incident‚ but the National Prosecuting Authority decided not to prosecute. The state reconsidered its decision after AfriForum and former prosecutor Gerrie Nel announced that they intended to pursue a private prosecution.

A fresh application needed to be brought to the court to allow the media access to record the proceedings‚ Baba said. The application would need to be submitted and heard at the same court at least two weeks before the commencement of the trial.

Zuma’s lawyers have indicated that they intend to oppose the media’s application to broadcast the trial.

Following the proceedings at the Randburg court‚ Zuma junior and senior left amid heavy security. Duduzane is also due in the Specialised Commercial Crime Court in Johannesburg on Thursday to face corruption charges. These are expected to be withdrawn.

Former president Jacob Zuma’s son Duduzane appeared before the Randburg magistrate's court on a culpable homicide charge on January 24 2018, after which he was due in the Specialised Commercial Crime Court, where corruption charges against him were provisionally withdrawn.

Ex-president Zuma goes back to court
News
3 years ago

Former President Jacob Zuma has again come to court to support his son Duduzane‚ whose trial date for culpable homicide has been provisionally set ...
News
3 years ago
Next Article