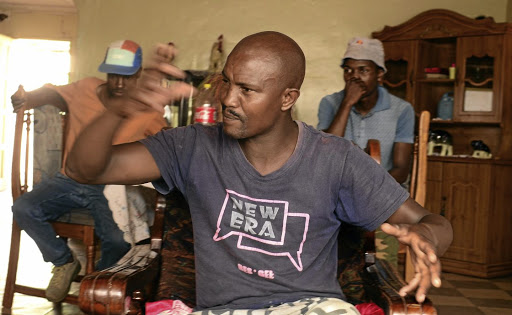 Bonakele Pakisi with his friends at his home yesterday after SAPS members visited his home to take a statement after a Sunday paper reported that he confessed to lying to the court about the Coligny case.
Image: Tiro Ramatlhatse

Residents of Coligny in the North West have rallied behind the sole witness in the murder case of teenager Matlhomola Mosweu amid controversy over his testimony.

Bonakele Pakisi, the man who witnessed Mosweu's assault, has had to open a case of intimidation with police.

This was after he was allegedly forced to discredit his own testimony made during the trial of convicted murderers Pieter Doorewaard and Phillip Schutte by claiming he had lied.

Doorewaard and Schutte were found guilty of killing Matlhomola after they accused him of stealing sunflower heads.

On Sunday, Rapport newspaper reported that Pakisi had confessed to a local cleric Reverend Paul Morule that he had lied to the court about Doorewaard and Schutte. But Pakisi has now alleged he did so after he was allegedly shown a gun and told he would die.

The community of Coligny met on Tuesday to voice their support for Pakisi and vowed to defend him against what Morule did. A resident, Bongani Nontenjwe said when Matlhomola was killed, Coligny came to a standstill with residents engaging in a week-long protest, seeking justice.

"At that time we were shot by the police, there was no Reverend Morule in the picture, now he takes Pakisi under false pretences far away from his home and forces him to confess to something he does not know," he said.

Another resident, Wesi Kelefetsoe, said it was shocking that the information came just a few days before Doorewaard and Schutte were to be sentenced.

"Why now? What is this Morule trying to achieve? We want that tape, we have the right to hear it. Police did not shoot us for nothing," he said.

Morule said he invited Pakisi to Mahikeng, making it clear to him that he was going to record him while confessing that he lied to the court.

Morule said Pakisi told him that he could not sleep at night as he had lied.

Doorewaard and Schutte are expected to be sentenced on Monday.

Police must act swiftly on the allegations made by the sole witness in the murder case against two Coligny farmworkers convicted of killing teenager ...
Opinion
3 years ago

The only eyewitness in the infamous Coligny murder trial against two white men convicted for throwing a teenager from a bakkie has apparently ...
News
3 years ago

Man attacked in his Coligny home.
News
3 years ago
Next Article