DA leader Mmusi Maimane has remained defiant about the party's refusal to remove its controversial billboard bearing the names of people who died during the Marikana massacre and the victims of the Life Esidimeni tragedy.

Addressing the media after his "kasi-to-kasi" tour at the KwaMnyandu shopping mall in Umlazi, Durban, on Wednesday, Maimane said he would meet families of the victims in a couple of days about their decision to take the DA to court over the billboard.

"I will be engaging with the families and I look forward to speaking to them because I’m deeply humbled by South Africans. I will engage with families in different ways. What doesn’t change is the fact that the fundamental issue here is a government that killed its people.

"What happens to a government that takes our mentally ill patients, puts them in facilities where they end up dying in that situation, where the people in Marikana who marched down the road, they were killed by an ANC government?"

Maimane said the billboard, unveiled last week in the Johannesburg city centre and which sparked a huge public outcry, was a reminder to South Africans about the Life Esidimeni tragedy and the Marikana massacre. But some family members of the victims have complained that they were not consulted about the billboard, which was torn apart a day later.

"At this point, the message must remain. The billboard is only a reminder to South Africans that Life Esidimeni took place, Marikana took place, children are dying in pit latrines. At which point has there ever been a politician who is held to account?"

He said the DA had taken up the fight on behalf of the people of Life Esidimeni because they wanted justice for the victims.

DA leader Mmusi Maimane‚ as a South African and "in particular as a black person"‚ should respect the cultural protocol of dealing with those who ...
News
2 years ago

"Even today some of the family members have not been compensated for the loss of their loved ones. We will continue that fight because ultimately if this ANC government continues and no accountability is held, tomorrow it will further be family members and South Africans who are being killed by the same government."

Asked why the DA had decided to erect the billboard during an election year, as this was viewed by some as an insensitive way to campaign for votes, Maimane defended his party’s decision, saying the DA had fought for Life Esidimeni victims from the beginning.

"Don’t lose track of the fact that when we started the fight we asked the question: 'What is happening in Life Esidimeni?' We engaged many South Africans on the issue. And we proceeded going forward to say we will fight for them in parliament.

"This has been happening, it’s a historical matter. It’s not that the billboard suddenly is the beginning of this issue. The issue began when we asked the Gauteng government: 'Why are you allowing patients to live in places such as this one?'

"We have represented the people, we will continue to fight." 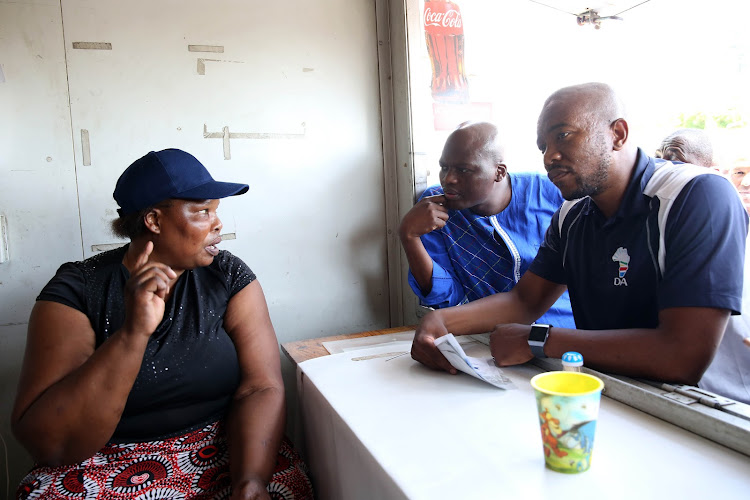 He said South Africans had a choice at the end of the elections whether they put the ANC - which he blamed directly for the Life Esidimeni tragedy and the Marikana massacre - back into government.

"It’s important that this year South Africans make a choice. Can you imagine at the end of the elections in Gauteng we put David Makhura back, we put Qedani Mahlangu back, we put the ANC back into government - the same people who killed our people?

"How can it work? We must hold them to account and therefore this is the year where all of us a citizens can stand together and say 'enough is enough'. We want to build a South Africa where, without doubt, citizens should not die."

The DA’s presidential candidate, who was in KZN to drum up support for the DA ahead of the final voter registration weekend, also said that the DA was taking a firm stand against politicians who were named during the ongoing state capture hearings.

He was accompanied by the party’s KZN premier candidate, Zwakele Mncwango, and the DA’s Team One SA spokesman on crime, John Steenhuisen.

Maimane is scheduled to meet members of the Indian community, business owners and informal traders at the Phoenix Plaza and later join a live-streamed "Phoenix Let’s Talk" public meeting to discuss the DA’s election offering.

The DA has defended its controversial billboard in Johannesburg after it was vandalised yesterday.
News
2 years ago

The DA billboard in Johannesburg unveiled on Wednesday listing the names of children who died after falling into pit latrines and the victims of ...
News
2 years ago

The controversial DA billboard has been torn down by angry people just less than 24 hours after it was mounted during a fanfare march in the ...
News
2 years ago
Next Article