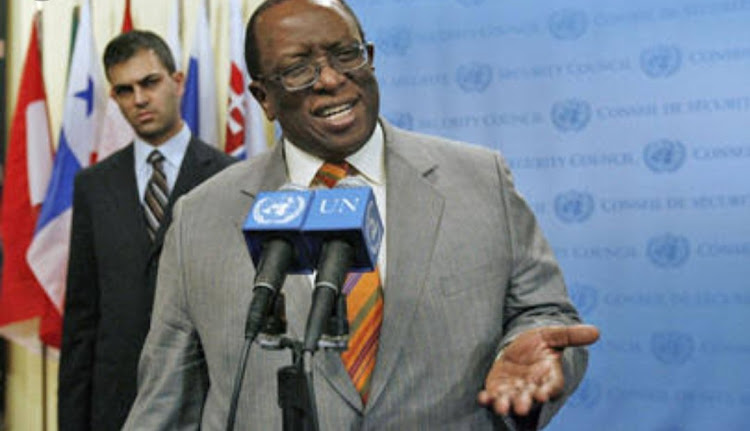 Paying tribute to Ambassador Dumisani Kumalo, international relations and cooperation minister Lindiwe Sisulu said at a time when multilateralism was under threat, his experience and wisdom would be sorely missed.
Image: Africa Insights/Twitter

Lindiwe Sisulu, the Minister of International Relations and Cooperation, on Monday paid her respects to the family and friends of the former permanent representative of South Africa to the United Nations (UN) in New York, Ambassador Dumisani Kumalo, who died on Sunday.

Born in September 1947, Kumalo left a rich legacy as a multilateralist, she said.

“South Africans must celebrate the contribution Ambassador Kumalo made in the fight against apartheid during his years in exile in the United States, which culminated in the UN Security Council recognising apartheid as a crime against humanity. Ambassador Kumalo played an important role in promoting multilateralism and a strengthened and reformed United Nations. At a time when multilateralism is under threat, his experience is wisdom will be sorely missed,” said Sisulu.

Hugh Lewin has died at the age of 79 at his Johannesburg home‚ friends said on Thursday.
News
2 years ago

Ambassador Kumalo served as Permanent Representative of South Africa to the UN in New York from 1999 to 2009. During his 10-year tour of duty, Ambassador Kumalo held many prominent positions at the UN. He will mostly be remembered for representing South Africa during its first tenure on the UN Security Council, from 2007 to 2008. Ambassador Kumalo also served as chairman of the ECOSOC Ad Hoc Advisory Groups on Guinea Bissau and Burundi, co-chair for the establishment of the UN Human Rights Council and chair of the Non-Aligned Movement (NAM), the Southern African Development Community (SADC) and the Group of 77 (G77), plus China (G77), at the United Nations.

He will also be remembered for having mentored many young diplomats at the Department of International Relations and Cooperation (Dirco) head office and those deployed to the Permanent Mission to the UN in New York.

Details of Kumalo’s memorial service and funeral will be communicated during the week.

Meanwhile, tributes are also being shared on social media.

Former SA Special Representative to @UN, Dumisani Kumalo has died. What a loss to SA & the world. He was a seasoned diplomat & an exceptional ambassador. When I first visited the UN, nearly all the diplomats I met asked how Amb. Kumalo was and spoke highly of him. May he RIP. ??

It is with deep sadness that we send our most sincere condolences to the family and loved ones of Ambassador Dumisani Khumalo. May his soul rest in peace. A fighter. An impeccable diplomat. The best among us. pic.twitter.com/Hxb4KYxs8K

#DumisaniKhumalo. The untimely death of Amb @DumisaniKhumalo is a serious blow to @SouthAfrica. He was a seasoned diplomat, a good friend and a brother. I shall miss his wise advice and counsel. @DIRCO_ZA, @diplomatic_the, @UPTuks . RIP excellency. Long live the Republic. pic.twitter.com/GMHHwyLanQ